Maria Custard was one of the apprentices of the magician Ragishss, and is known as one of the Four Witches of Kathtom, specializing in water magic. She turned to the technical side, and worked on various technical inventions right after Rance saved her, which also caused her to lose most of her magical power. Ever since that event, she has been progressively liking him more and more before admitting to be in love with him over the course of a few games.

One of her interests is tech development, being the Tulip series her most popular and famous creation. She is also a close friend to Shizuka Masou, as they were studying magic together and being taught by the same person, Ragishss.

Maria is a tech girl obsessed with robotics and technology devices. Despite being in a magic school she was far more interested in research and engineering and would often work in other simple inventions. She's interested in magic but only as a form of research and study rather than for being a mage herself. She's a bit clumsy and curious, leading to some unfortunate situations. She has developed many interesting weapons and devices but her most prominent invention is the Tulip Series. She's a bit of a glutton and enjoys eating a good and abundant meal, which has led her to get a bit worried over her weight.

She's been in love with Rance almost since she first met him. While at first she wasn't honest with herself she ended up realising of her own feelings. However, she's depressed due to Rance's relationship with Sill Plain. Despite his obsession with making every attractive woman in existence his, it's pretty clear that Rance cares more about Sill than he does about anybody else, which made Maria to recognize that she doesn't have a chance against Sill. She's still willing to help him on any situation he's in and will give him all her support with her inventions.

She rarely agrees with Rance's plans though since they mostly involve her doing embarrassing stuff and she's always humiliated by it, like being captured by the enemy commander(who is a pervert) or being forced to strip in front of a mirror to be allowed to move to the next floor in a dungeon. Her best friend, Shizuka Masou, doesn't approve her love towards Rance and is worried about her for it. She met Shizuka in their childhoods during their time in Ragishss' magic school and they are almost always together. Maria is way more optimistic and cheerful than her friend is though.

She has some pretty good leadership and teaching skills, since she's able to lead and efficiently have several girls working under her in the Maria Factory. Her apprentices have learned a lot from her and have grown to respect her for her intelligence.

Maria was raised as a magician in Ragishss' magic school and has a Magic Lv1 skill. She was mostly proficient with water magic but, ever since the Kathtom Incident, she lost her magic power and her ability to use magic. She wasn't really upset by it since she was never really interested in becoming a mage herself, but saw magic as nothing but an interesting research field. Fortunately for her, she apparently has enough magic left in her so she can get past magic barriers that non magic user can't get through.

Maria has always been more fond of engineering and science than magic, and she's extremely skilled with it. She has a Mechanics Lv2 skill, making her an outstanding genius in the field and has gained some fame with the creation of her Tulip Series. So much infact that her model was stolen by Copandon Dott and sold to Tanegashima in JAPAN, which was modified to create the muskets. The head of the house, Tanegashima Shigehiko, was incredibly impressed by her invention and has admired her since, even worshiping her as "The Tulip Goddess Maria". Her inventions are decades above the common population and her genius has moved among many fields of science, and her incredible and creative mind is so impressive she was deemed as a Balance Breaker. Luckily, she wasn't terminated and was allowed to keep living for the time being.

Maria rebuilt the abandoned factory where Bean Pole(Maria's childhood hero) used to work at. She renamed it the Maria Factory and started manufacturing things. Several girls who are interested in her works eventually join as her apprentices.

The Tulip #3 that was used in the battle against the Helman Army during the Leazas Liberation War was extremely useful to the point it really turned the battle to Leazas's favour, and it granted her quite some fame. However, she got a little ahead of herself and started experimenting with underwater ships, airships and even some spaceships(although the last one was a failure). One of her apprentices, Kasumi, became the assistant manager of the factory and Maria's right-hand woman. At this point, Maria had a total of 13 apprentices, all working for her in the Maria Factory.

In Rance Quest she invented a Nuclear Reactor that could rival with Zeth's mana battery but doesn't need to be supplied with magical energy. Sadly, it was frozen at design stage due to being unable to control it and stabilize it properly.

Maria's not particularly strong in direct combat, since she's clumsy and her physical powers are nothing worth nothing. However, she usually wields a hand-canon tulip that makes her an opponent as dangerous as a strong mage. Her current level is 20 and has a cap of 40 but she doesn't really rely on levels to become stronger since it mostly depends on how far she can improve her tulip to become more powerful.

Right after being born in the year GI0999, Maria was abandoned in front of a Helman orphanage by her parents. Black Custard, the head of the orphanage, names her Maria after his stillborn child and begins raising her. Even from a young age she was interested in science and engineering. She starts sneaking out after bedtime to watch discovery and science programs on Magic Vision, and because of this, her eyesight worsens and she starts wearing glasses.

When she was 12 years old, Ragishss visits the orphanage and she joins Shizuka, Eleanor and Mill as his adopted children. Studying at Ragishss' magic cram school, she begins to excel at water magic, but she becomes infatuated with the strange manufacturings of a tall, silent man who works at a local factory and starts visiting there frequently. His nickname is Bean Pole, and she remembers him as a giant but he's not actually that tall.

Inspired by his creations, she uses a milk carton and a straw to create the Tulip #0, a high-pressure water gun with about the same power as rudimentary water magic. She happily shows Ragishss her invention but he's furious that she's doing something that denies magic and she's punished.

A few years later a beautiful genius lady appears and accidentally deliver a monthly academic journal to Maria, who becomes engrossed in the journal.

With Bean Pole's creativity and the basic knowledge she gained from the academic journal, she creates the prototype cannon of the Tulip #1. This time she keeps it a secret from Ragishss but it's still found and she's punished more severely.

In the year LP0001, she graduates from Ragishss magic school and is gifted with the Phil Ring. However, as a side effect of the Phil Ring given to her, Maria goes insane. The devices and magic circles used to suck magic energy out people were created by Maria to help Shizuka in her selfish objectives after going mad as well. Not long after, the events of Rance 02 take place. 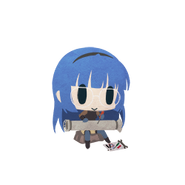 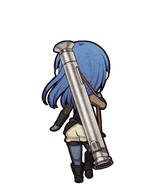 Maria in dungeons in Rance 03.

Maria in battle in Rance 03. 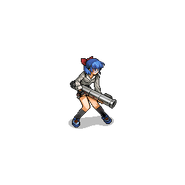 Maria's appearance in Widenyo.
Add a photo to this gallery