Maha Margaret was the little brother of the General of the 3rd Army of Helman, Minerva Margaret.

He's a young and inexperienced boy, but also brave and with a strong spirit. He holds his elder sister, Minerva, in high regard, admiring her immensely and is willing to do anything to prove himself useful to her. Despite this, she doesn't value him that much and sees him as another tool to reach her goals.

He makes his first canonical appearance in Rance IX after Rance and Patton defeat a band of slave traders. He shows up disguised as a noble named Maitrea Meishian, wearing high-class clothing and tinting his hair blue. He attempted to convince Patton to let him join the Revolutionary Army. His perseverance and determination manages to convince Patton, who begins to work with him. However, Maha was actually on a mission to infiltrate the Revolutionaries. He showed inner dislike for Rance and Rick in particular, seeing them both as idiots.

He was eventually exposed and as a result, he attempted to use a Puchi Hanny, a miniature Hanny that serves as a tremendous explosive, to deal a severe blow to the Revolutionary Army. He was cut down by Rance and kicked off a cliff, dying from his own explosion. 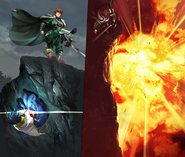 Maha's death in Rance IX.
Add a photo to this gallery

Retrieved from "https://alicesoft.fandom.com/wiki/Maha_Margaret?oldid=89549"
Community content is available under CC-BY-SA unless otherwise noted.