AliceSoftWiki
Register
Don't have an account?
Sign In
Advertisement
in: Articles with No Spoilers, Gods, Male characters,
and 4 more

In the Beginning, there was the dark void of space, there were stars and far-off entities, but in this part of space there was only Ludo-Rathowm.

Ludo-Rathowm could not remember how many eons he had existed for, nor could he realize what that itching feeling at the back of his mind was.

Then one day, he felt a pang of inspiration.

He realized what that nagging emotion was, it was boredom.

It was unbearable boredom and loneliness, and he decided to do something about it.

From his body, he created four animals, they would be the foundation of his plan. In approximately three minutes, he created a landmass, The Continent.

Then a thought struck Ludo-Rathowm, he was creating life for the purpose of alleviating his boredom, and it wouldn't be much fun if he had to do it all himself. After thinking this, he created three beings to govern his reality:

These Three Supreme Gods would manage this Continent, leaving Ludo-Rathowm the freedom to sit in his closed space and watch the fun at his discretion. Nobody but a couple of people on the continent currently believe in Ludo-Rathowm. He did appear in the early days of Humanity as a God of an ancient religion, but he got bored of that after a while and the religion eventually died out.

The Genesis Documents are written by Ludo-Rathowm, and chronicle the creation and early history of the Continent, even though it is a great historical artifact, everyone that knows of the documents believe it's an elaborate joke as they find the notion of God being a Great White Whale to be absurd.

There is an ancient inscribed plate in the Zeth Kingdom that reads:

Ludo-Rathowm is the Soul terminal, all life returns to him and then it is reborn. He is literally made up of the life force of every living being on the continent, a sentient mass of souls taking the form of a 2km White Whale. He has 12 wings on each of the six fins, 72 wings in total.

Ludo-Rathowm is the source of all life. All souls originate from the Creator God, and return to him. Mortals such asHumans, Kalars, and Monsters are born from these souls. Gods oversee these procedures.

When the mortal dies, the soul is taken to Hell, where it is cleansed to a blank state by the Oni inhabiting there, and returned to the Whale God. While it's very rare, sometimes a strong attachment to life can't allow the soul to pass on and they stay in the mortal world as ghosts. Once whatever binds them stops existing, they can finally move on.

Devil King Rathowm wishes to overtake and replace the Whale. His minions, the devils, seduces mortals to make pacts with them for their souls.  The devils steal the souls from the cycle, and takes them to Rathowm.

He is immensely powerful, being able to immobilize armies with a mere glance.

He can construct lands, and subtly influence worldly events for maximum chaos.

The power difference between him and anyone else is astronomical, in the non-canon Kichikuou Rance, he asks if there is a mosquito or an itch on his back when Rance uses his ultimate finishing move on him.

At the core, Ludo-Rathowm is a huge mischievous child. He takes comfort in negative feelings such as sorrow and heartbreak, often tipping events on the Continent in that direction.

He sees the world as nothing more than a theatre for his entertainment, describing it to Planner as a "Superb Comedic Tragedy". The reason he asked for monsters to be created was to inject drama into his world. He finds suffering, hatred, and sadness comforting, and likes death and destruction due to its nature to create negative emotions. He finds entertainment in tragedy and chaos, and likes to keep his world that way.

He has a particular dislike for Dragons, as they brought peace and co-operation to his world. He also thinks that Humans are the best Protagonist Race to date, as they are sturdy enough to defend themselves, but squishy enough to die in an assortment of horrible ways. 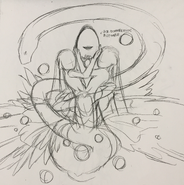