Louis Quitowack is an adventurer of the Keith Guild.

A mild-mannered man in spite of his appearance, Louis works hard as an adventurer to pay off the staggeringly high debts that he has amassed across his life. Despite this, however, he has a tendency to take on jobs that are too difficult for him to complete due to them offering the largest reward. This results in him frequently failing them, causing him to rarely ever obtain the money he requires and making him one of the lowest-ranking members of his guild.

During the events of Rance 01, Louis was hired by Bobza Flanders to rescue his daughter Pulptenks Flanders from the Endless Tomorrow Gang. While Louis managed to uncover the group's hideout along the outskirts of Leazas Castle, he was quickly overwhelmed by several of its members and forced to retreat. While retreating, Louis ran into the warrior Rance, who had also taken on the job. Rance initially mistook Louis for a member of the group and attempted to kill him, but stopped after Louis showed him his Keith Guild membership card and explained to him what he had been doing. Louis then attempted to convince Rance to team up with him to defeat the bandits, offering to split the reward money, but was rejected and promptly abandoned by the other man.

Following his failure to rescue Pulptenks, Louis remained in Leazas Castle Town to evade the debt collectors searching for him in the Free City of Ice. In an attempt to make money, he entered into the Leazas Coliseum, where he succeeded in reaching 9th in the rankings before being pitted against Rance, who had entered into the tournament to face off against the mysterious ninja who he believed was also participating. Louis made an effort to persuade Rance to throw the fight for him, but was refused and defeated easily by the uncaring adventurer.

As a last ditch effort to gain the funds needed to pay off his debts, Louis gambled the remainder of his money at the Leazas Castle Town Casino, only to lose it all. After losing the last of his money, Louis was approached by Rance, who happened to have been investigating the casino at the time. Louis begged Rance to loan him 10 GOLD to allow him to continue to test his luck.

Should Rance agree to give Louis the money, he will force the other adventurer to do something to entertain him first, prompting a flustered Louis to place his sword's hilt on his forehead and pretend to be a Unicorn Gal Monster. While Rance is not amused by the routine, he gives Louis the GOLD anyway, causing Louis to swear to pay him back for it later. Louis makes good on this promise sometime afterwards when he happens to pass by the coliseum champion Yulang Mirage getting mugged in an alleyway by her jilted suitor Jean Gyanban II and two former members of the Endless Tomorrow Gang. Recognizing Yulang as an associate of Rance's, Louis intercepts the muggers and succeeds in rescuing the caught-off-guard Yulang from them, claiming the act of doing so to be his first step in paying his fellow adventurer back. Afterwards, Louis sets off outside of the Castle Town in search of other ways to gain money.

Alternatively, should Rance refuse to loan Louis the money, he will dejectedly leave the Castle Town slightly earlier, preventing him from being able to rescue Yulang from her attackers.

During the events of Rance 03, Louis, still no closer to paying off his debts, took on a job of rescuing a group of miners who had become trapped inside of the Rekka Mines located to the north of Ice. At the entrance to the mine, Louis once again encountered Rance, who had coincidentally come to the mines in search of rare Hirara Ore. Rance did not remember Louis and again mistook him for a bandit, causing him and his party to attack the hapless adventurer, forcing Louis to flee without completing his assignment to avoid getting killed. Following this encounter, Louis could randomly be encountered by Rance and his party while they were traveling from one location to another, where they would once again mistake him for a bandit and attack him, with Louis always dropping a rare item upon his inevitable defeat.

Shortly following the Leazas Liberation Army's successful eradication of the Helmanian occupation of Leazas and the Free Cities, Louis, alongside several other members of the Keith Guild, met with his guild master Keith Gold to discuss his guild ranking. Keith revealed to Louis that he had dropped to the bottom of the rankings due to the previous lowest-ranking member, a mysterious man known only by the alias Burning B!, having left the guild. Keith advised Louis to take on lower paying and less difficult jobs to raise his rank, which Louis disagreed with, stating that he needed money too soon to enjoy such a luxury.

In the non-canonical Kichikuou Rance, Louis appears as a mercenary under the employ of the merchant Pluepet rather than as an adventurer of the Keith Guild. Louis can be hired to work under Rance as a commander as soon as Rance becomes the king of Leazas, leading a squad of either 200 or 1,000 mercenaries depending on how much money Rance pays him. Louis will complete his contract with Rance after being deployed in battle once, and is required to be re-hired each time Rance desires to use him again. He plays no other role in the game besides this.

Louis is an exceptionally shifty-looking man with a wild, ugly, and thuggish appearance. He possesses a large body with a muscular build, sharp teeth, piercings on his ears, forehead, and tongue, hair styled into a pink and yellow mohawk, and a left eye that is lacking any visible pupil or iris. He is never seen without his tongue hanging lasciviously from his mouth, causing him to seem perpetually crass and predatory. Louis' clothing consists of a sleeveless leopard print shirt, a spiked shoulder guard around his right arm and leather pants with a skull emblem along the left leg.

Louis' appearance is largely the same in Kichikuou Rance, though his shirt is a solid green color as opposed to leopard print, he has a piercing on his lower lip as opposed to on his tongue and he possesses two shoulder guards instead of only one.

Contrary to his savage appearance, Louis is actually a fairly meek, timid and passive individual. He appears to be prone to making poor decisions, as he has racked up a considerable amount of debt across his lifetime. To pay off this debt, Louis tends to perform high-risk, high-reward tasks, such as dangerous mercenary work or gambling in a casino, in an attempt to gain a large amount of money in a short amount of time, only to fail at them and gain no money in the process. As a result of this lifestyle, Louis is almost always anxious and high-strung, and frequently expresses worry for his future.

Despite Louis' financial woes, he is nonetheless a relatively good-natured man who is friendly to everyone that he encounters. In particular, he seems to believe in a shared sense of camaraderie between himself and the other members of the Keith Guild, seeing it as a guild member's duty to assist their fellow adventurers whenever they see them in need. While Louis frequently takes advantage of this belief as a way to persuade other members of the Keith Guild to help him out of the countless problems he finds himself in, he always follows through with repaying those who actually take the time to assist him, making him an unexpectedly reliable ally.

Louis has a somewhat strange relationship with his fellow guild member Rance. Due to his belief in the inherent bond between guildmates, Louis perceives himself as being on friendly terms with Rance, and always happily greets him whenever they cross paths. In spite of this, Rance, well-known for his poor ability at remembering other men, always forgets who Louis is between each of their encounters. Their relationship is further complicated by Rance's tendency to mistake Louis for a bandit due to his appearance, which causes him to mercilessly attack the other man upon seeing him, forcing Louis to hurriedly reintroduce himself to avoid getting killed. Despite these frequent attacks, Louis still seems to hold Rance in a fairly high regard, and frequently attempts to ask for his help in accomplishing various tasks, making sure to pay him back on the rare occasions where he complies.

Louis' personality is entirely different in Kichikuou Rance, where he acts much more in line with his appearance, being a crass and rowdy mercenary who is always eager to fight. While Rance is disgusted by Louis' appearance and behavior, causing him to frequently insult him, Louis is actually grateful for this frankness, as all of his previous employers were too intimidated to even attempt to engage in ordinary conversation with him.

A largely unremarkable fighter, Louis has a tendency of taking on tasks that are much too difficult for him to be able to accomplish, finding himself overwhelmed when pitted against an entire group of bandits and losing quickly and easily against the powerful Rance in combat. Despite this, he is not entirely without skill, and was able to defeat Jean Gyanban II and two bandits in a three-on-one battle, as well as an opponent in the Leazas Coliseum prior to being forced to fight Rance. Overall, Louis seems to be an above-average warrior whose skills tend to be overshadowed by the dangerous situations he frequently finds himself in.

In combat, Louis utilizes a large two-handed sword. It is unknown to what degree, if at all, he possesses any talent for wielding it.

Louis is presented as being considerably more skilled of a fighter in Kichikuou Rance, where he leads a band of mercenaries well-known for their savagery and willingness to fight anything anywhere at any time so long as they are paid enough. Rather than a single two-handed sword, Louis wields a pair of short swords in combat. While he is listed as possessing a high Level Cap of 39 and a Sword Combat Lv1 Skill Level in Kichikuou Rance, overall giving him a very good amount of potential as a warrior, it is unknown if he still possesses these values in the current canon.

For more in depth gameplay information on each of this character's appearances, refer to: 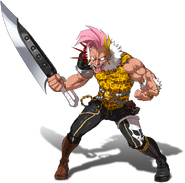 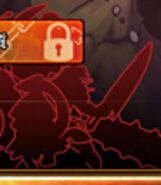 Louis' silhouette among the enemy forces in Rance X.

Louis' appearance in Rance 01: Hikari wo Motomete The Animation.