Lorenzo Kalar was once a resident of Kalar Village, and a personal aide to Queen Mertel, often assigned on duties to the neighbouring Kingdom of El Quixote. While on one such assignment, Lorenzo met the heir to the throne, Pancho Quixote, and the two eventually fell in love and became engaged.

Unfortunately, their happiness was not to run uninterrupted. Lorenzo was kidnapped on order of Rocinante, an agent of the Snake Crest, and was publically raped by several Outlaws. Pancho rescued her in a bloody attack on live, international broadcast, and served Rocinante's cause to turn the humans of El Quixote against their Kalar neighbours. Thankfully, Lorenzo's best friend, Kathryn Lapucelle, was able to organize a second broadcast to stall the war, and she and her family were able to kill Rocinante before he could do any further harm.

Lorenzo and Pancho have sinced been married, and live happily. As Pancho is the current heir to the throne, Lorenzo will likely one day be queen consort, and the mother of a line of Kalar queens that will rule El Quixote for the foreseeable future.

Although she didn't know it herself, Lorenzo is the daughter of Queen Mertel, and probably the daughter of King Ben of El Quixote, strengthening her claim to the throne.

Lorenzo is a shy introvert, traits that have helped her become friends with Kathryn Lapucelle, although neither to Kathryn's extremes. She is still able to perform in a very public career without too much trouble, though Queen Mertel likes to tease her when she can. Because of her shyness and personal values, Lorenzo remained a virgin relatively late in life for a Kalar, but now that she is married, she regularly pesters Kathryn for sexual advice.

As a Kalar, Lorenzo is not governed or protected by Mother Eve's blessing. This means she could theoretically kill someone from a species under Mother Eve's protection, or could have sex with any number of people, both without becoming an Outlaw. Unfortunately, the same is true of her in reverse. Notably, this means the blessing has not given her and Pancho a wedding ring, despite their marriage. Lorenzo was a accomplished personal aide to a head of state, implying a number of secretarial and diplomatic skills. 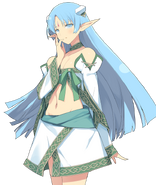 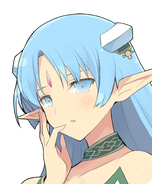 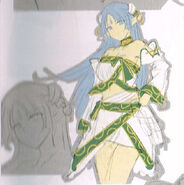 Concept art of Lorenzo from the Evenicle manual. Note the blue crystal.
Add a photo to this gallery
Retrieved from "https://alicesoft.fandom.com/wiki/Lorenzo_Kalar?oldid=102577"
Community content is available under CC-BY-SA unless otherwise noted.