AliceSoftWiki
Register
Don't have an account?
Sign In
Advertisement
in: Articles with Minor Spoilers, Characters, Female characters,
and 3 more

Lil Avenger is a Rare Gal Monster (with only one known in the whole world) whose duty is to assassinate the target specified by her client. She resides in treasure chests, and the person who opens the chest becomes her next client. She is known to be fairly tough and extremely persistent, but she is not particularly clever.

To set a target for assassination, you must have one of the following:

Once her assassination target has been set, she will try to set up traps to distract her target, leaving him vulnerable. If this fails, she will try to fight him directly, and though upon defeat she will retreat, she will always eventually return until her contract is fulfilled, no matter how badly she has been beaten. However, due to her simple-mindedness, she can be tricked fairly easily.

During the events of Rance 5D she is contracted by Bird Lithfie to kill Rance, as Bird had found her by accident and when asked for a target, he instinctively blurted out his foe's name. She consistently pursued Rance throughout his adventure on Genbu Castle, but was defeated multiple times. However, she was able to "succeed" on her mission when Rance faked his own death, tricking her into thinking that her mission was over.

In Rance VI her chest was found by Rocky and given to Rance. She fails to recognize him, saying that her target never escapes alive, and demands to be given a target to kill. Rance refuses, stating that he would rather deal with his enemies by himself. Without a target she couldn't do her job or return to her chest, so she joined Rance under the impression that he would eventually provide a target for her. However, Rance never complied with her request, and instead insisted on having sex with her, to which she reluctantly agreed. Later on, she confesses to Rance that she was actually happy that she could take a break from killing and for being appreciated for something other than enacting revenge. Eventually she reveals that she has a time limit for how long she can spend outside of her chest without being given a target. Before time runs out she thanks Rance for the time she spent alongside him and told him that if he were ever targeted, he could simply fake his death and that she would overlook it.

After returning to her chest, while wondering who will open her next, she gets the feeling that she has gone back in time. She then hears Copandon and Bird's voices, and they have the same conversation as they do in Rance 5D when they encounter her chest originally, implying that Lil Avenger traveled back in time to the events of Rance 5D after her time with Rance in Rance VI. This would explain why she was able to identify Rance despite Bird not providing a mug shot, Rance's smell, or Rance himself. It would also imply that she knew Rance was faking his death and let him off the hook, as promised. The method through which she travelled back in time is unclear but it could be related to the strange nature of her chest coupled with the odd properties of the pocket dimension in Genbu Castle. 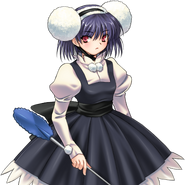