Lelyukov Berkov was the Commander of Helman's First Army, the main defensive unit of the Helman Empire. A man of great experience in the battlefield that has served the country for half a century without hesitation, his outstanding commanding and tactical skills have turned him into a famous figure and is greatly renowned throughout the land as a war hero.

Since the death of his old friend Thoma Lipton, he has served as the backbone of Helman's Army due to his skill and experience. He is a noble man who is completely devoted to his country and is greatly troubled by the direction it has moved in since Stessel Romanov was declared Prime Minister. Despite his worries, he continues to serve his country without hesitation and remained completely loyal to the Imperial Family. He had a young daughter named Amiran, and his love for her is the one thing that outweighs his love for his country. Many have tried to use her in the past in order to get to Lelyukov, and cases of her being kidnapped have almost occurred in more than occasion.

Despite his incomparable devotion and passion for his country, Lelyukov grew exhausted and was progressively worn out over the years by his harsh life as a soldier in a country like Helman that is known for its hostility. He has served in the army since he was around 13 years old, and continued to do so until present when he reached 63 years old. While his love for his country and deep sense of responsibility led him to remain in duty and serving as a commander, his old age and signs of fatigue were noticeable by those close to him. At some point either in LP5 or LP6, he had an intense argument with his daughter, who tried to convince him to retire. The dispute ended up distancing them, and Amiran even ended up leaving the country as a result.

At some point, Lelyukov rescued the young Pigu Geliciam that was being experimented by the mad Doctor Oama, keeping her under his protection in the 1st Army. They grew very fond of each other, and a strong bond was formed between the two that was almost like one of a grandfather and his grandchild.

He made his first canonical appearance in Rance IX: The Helman Revolution, where he first appeared in an introductory scene presenting his character and describing his background. He made physical appearance after the death of the General of the 4th Army Nero Chapet VII, which led the Council of Eight to realize that they can't ignore the group of outlaws anymore and Kechak decides to send Lelyukov to subjugate the group, since the remaining Armies were busy in other parts of the country. Despite the incorrect information handed to him by his boss, Lelyukov managed to predict the movements of the Outlaws and confronts the group, preventing them from advancing. From that point, the small elite group led by Rance faced several attempts trying to outsmart the experienced commander, but they all proved futile and the group was almost crushed several times despite the extremely talented people the team consisted of, making of Lelyukov a formidable foe.

Eventually, the group was able to succeed thanks to the help received from Sanada Tourin and an unconventional strategy performed by the group, which gave Rance a chance to face Lelyukov directly in a duel. Expecting it to be an easy win, Rance was surprised to find him to be a quite sturdy man, but he still managed to come out victorious of the battle, leading a frenetic Russian to rush to his location in an effort to prolong his lifespan, much to others confusion. Lelyukov was happy to see that Patton grew into a fine man, and gave Pigu his last words before finally passing away with little regrets.

Lelyukov was a robust and big-boned man with a tough yet serene expression. He was corpulent and with a big body typical of a Helman Knight, wearing a heavy armor distinctive of the Helman Army at all times despite his old age. He had a prominent hoary beard that extended and merged with his hair, which covered most of his face and left only his eyes and his big nose remaining visible.

Despite his seemingly stern and serious appearance, Lelyukov was a highly righteous man of great kindness and humility. His love for his country and its people was absolutely remarkable and, coupled with his extraordinary war record, made him one of the most respectable and admirable figures in Helman.

A noble man deeply worried for his country's future, Lelyukov kept to himself a heavy responsibility of safeguarding the country after Thoma's death, and was strongly against the idea of retiring as he felt that his country still needed of his service. He had an absolute loyalty for the Empress, so great infact that the idea of being forced to choose his daughter's safety over his duty filled him with guilt and grief. Lelyukov longed for retirement, but he would never admit it to himself as he felt that he still he wanted to protect the country as he'd done his whole life and wouldn't accept his own lack of power due to age. Despite his unquestionable loyalty, he held a very hostile stance against the Prime Minister Stessel Romanov, as he was aware that he was the main reason for the corruptive government that had been installed in Helman, and had no respect over him. Similarly, Lelyukov's name and figure meant little for those close to Stessel from the Council of Eight, who saw him as rebellious and troublesome due to his negative disposition towards them. Kechak disliked him for this very reason, as Lelyukov would regularly flatout ignore his orders if he believed them to be too brainless.

In the past, Lelyukov was a close friend of Thoma Lipton, the former General of the 3rd Army who was also renown as one of Helman's greatest soldiers. The two had known each other since their early days as mere recruits, and kept a solid friendship for all these years. Lelyukov was deeply saddened by his friend's death in 7th Helman-Leazas War, and was filled with a feeling of responsibility for carrying on with his friend's legacy to protect the country. Similarly to his friend, he would also take defenseless or homeless children and keep them under his wing in order to protect them, being Pigu Geliciam a good example of this. He was a man that was mostly driven by what he believed was the right thing to do, being probably the most well-intended and reasonable man in the Army. However, he also had a tendency of overexerting himself and, despite being a very sensible and rational man, was incapable of seeing hiw own limits. His firm resolve and incredible stubbornness were both his greatest strength and weakness.

An extraordinary man, Lelyukov was famous for his astounding skill as a Commander and Strategist. He participated in countless battles for Helman with exceedingly positive results. A remarkable genius, he could effortlessly lead a large number of soldiers in the battlefield and outwit his opponents several times without failing. His skill only grew greater with time, refining his technique and turning him into a greatly experienced veteran that could only be matched by the greatest of the greatest. He's a wise and smart tactician, with a very sharp mind that allows him to predict and counter the enemies movements several steps ahead. This was perfectly showcased in Rance IX, where Lelyukov managed to perfectly predict the movements of the Helman Revolutionary Army and mobilize an Army in order to trap them. His skills were so great that he represented an unshakable and impenetrable wall for the revolutionaries, who were continuously outwitted and almost completely obliterated several times when battling against Lelyukov's forces. Rance was notoriously annoyed by him, as he was able to consistently see through his underhanded tactics and easily outperformed him with his excellent leadership.

The only man that was on par with him in a battle of armies is the Supreme Commander of the Leazas Army, Barres Province, with who he had established a solid rivalry for many years, and none of the two had ever been able to defeat the other. Their battles have become famous throughout the world, and have further extended their reputation as brilliant commanders.

While his greatest talent were his leading and tactical skills, he was by no means a defenseless weakling. With a Level Cap of 41 and having reached a Level of 36, Lelyukov was a noteworthy Helman Knight that carried Guard and Sword Combat skills that allowed him to fight on par with powerful and well-trained warriors and adventurers. While his fighting prowess can't compare to the likes of Rolex Gadras or Minerva Margaret, he's stronger than the average Knight and perfectly capable of fending himself in an encounter despite his old age. 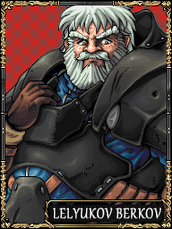 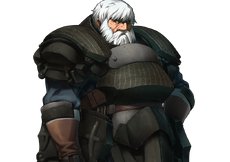 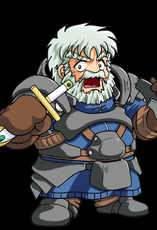 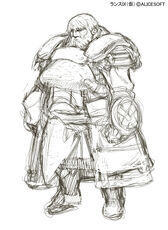 A sketch of Lelyukov for Rance IX.