The Leazas White Corps (リーザス白の軍, Rīzasu shiro-no-gun), also known as the Leazas 4th Army (リーザス第4軍, Rīzasu dai-yon-gun), is one of the four main divisions of the Leazas Army. The smallest of the four armies, the White Corps serves a somewhat unique role compared to its counterparts, specializing in informational warfare such as reconnaissance, espionage, and infiltration over direct combat.

Due to its small size, the White Corps is capable of deploying much more quickly than the other three Leazas armies, allowing it to efficiently gather intelligence on its opposition in order to better prepare for battle against it. The White Corps' speed also causes it to often be called upon to quell sudden and unexpected disturbances within the country that require immediate military action, such as revolts. While its soldiers are fully capable of conventional combat, their smaller numbers force them to rely mostly on quick thinking and underhanded tactics to gain an edge over their opponents during war.

The White Corps is currently led by Ex Banquet, a young and talented tactician who is known across The Continent as "The Literary General" due to his strategic excellence. Ex is well-known for his sharp mind and skill at predicting enemy movements, with his talents for strategy surpassing those of legendary military leaders such as Barres Province. Ex excels at commanding a small unit to victory against much larger forces through the use of guerilla tactics, allowing him to optimize the combat potential of the White Corps despite its lack of raw power. In turn, he is highly respected and admired by his soldiers, who place their loyalty to him above their loyalty to Leazas and even their own lives. While Ex is extraordinarily young for someone in his position, his appointment to the position of general was met with much less criticism than the similarly aged Rick Addison gaining the position of general of the Red Corps, likely meaning that he was already well-regarded by the nobility even prior to becoming general. 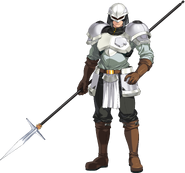 A group of White Corps knights' battle sprites in Kichikuou Rance.
Community content is available under CC-BY-SA unless otherwise noted.