AliceSoftWiki
Register
Don't have an account?
Sign In
Advertisement
in: Articles with Minor Spoilers, Articles with Spoilers for Untranslated Games, Leazas, Leazas Army

The Leazas Red Corps (リーザス赤の軍, Rīzasu aka no gun), also known as the Leazas 3rd Army (リーザス第3軍, Rīzasu Dai-san-gun), is one of the four main branches of the Leazas Army. It specializes in offensive combat, leading the charge of Leazas' forces when at war with enemy nations. Throughout its long history, it has yet to have lost a single battle, resulting in it being rumored to possess the strongest penetrative power of any single unit on The Continent. Its members wear a distinct red armor, a color which enemy soldiers have come to instinctively fear as a promise of relentless bloodshed.

While it is relatively small in size when compared to the other main armies of Leazas, the Red Corps is composed almost exclusively of the strongest soldiers the country has to offer, earning it a reputation as the most elite group of warriors in all of Leazas. As a result, it is often seen as the primary symbol of Leazas' superb military might, with even the legendary Helmanian general Lelyukov Berkov commending its excellence. By the time of LP0007, the Red Corps is described as being Humanity's strongest army, cementing its status as the most elite military unit on the Continent.

The general of the Red Corps customarily wields Byroad, a magical blade that is capable of stretching itself to extreme lengths. It is rarely ever used in combat, however, with ownership of it being largely symbolic of the person's rank as general of Leazas' strongest forces.

The Red Corps is currently led by Rick Addison, a prodigiously gifted swordsman who is known and feared across the Continent as the single strongest person in all of Leazas. Though Rick is unanimously recognized as an excellent warrior, his position as general of the Red Corps is seen as highly unusual. While all previous generals had been experienced veterans from well-known military families, Rick is the first common born person in Leazas history to have achieved knighthood, and attained the position of general at the incredibly young age of 25. While there was a large amount of contention from several nobles following Rick's appointment to general, it mostly dissipated after his legendary display at the Conflict at the Parapara Fort, where he single-handedly destroyed countless Helmanian soldiers, earning him the nickname of "The Red Reaper of Leazas" as well as global infamy.

Despite his outstanding individual strength, Rick is not flawless as a military leader, which results in his soldiers becoming disorganized and quickly crumbling when put into defensive combat under his command. When leading an offensive assault, however, any and all reservations Rick has disappear and he is filled with an insatiable bloodlust that causes him to ruthlessly slaughter all that stands in his way, with the awe and pride of fighting alongside the legendary Red Reaper resulting in his soldiers pushing themselves to their absolute limits and making the group nearly unbeatable. The offensive capability of the unit under Rick is so high that his generation of the Red Corps is rumored to be the strongest in the history of Leazas.

In the year RA0010, Rick was forced to step down from his position as general of the Red Corps after receiving severe injuries during the War of the Brutal King. Leadership of the Red Corps was eventually passed on to Zance Leazas, the country's crown prince and Rick's protégé in swordsmanship. Despite not yet even being 20, Zance shares Rick's excellent skills as a swordsman, which, in conjunction with his naturally superb individual potential, allows him to be a worthy successor to the legacy of the Red Reaper. By the 20th year of Blank Era, Zance is shown to have handed down the title of general to Rick's son Sturm Addison, but is still seen wearing the armor of the Red Corps, implying that he continues to serve as a member of the group in some capacity. 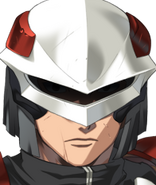 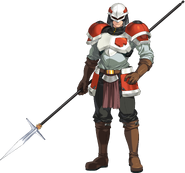