The Leazas Blue Corps (リーザス青の軍, Rīzasu ao no gun), also known as the Leazas 2nd Army (リーザス第2軍, Rīzasu dai-ni-gun) is one of the four main branches of the Leazas Army. It is the second largest of the country's four armies, and is beaten only by the Leazas Black Corps in overall size. Specializing in defensive combat, it serves as the country's border guard, and is its first line of defense against enemy invasions. To date, the Blue Corps has successfully prevented any and all conventional invasion attempts, earning it a reputation of being an impenetrable wall of skilled soldiers.

Soldiers of the Blue Corps are sturdy and tough, with builds that naturally allow them to protect their allies from harm. They receive special training in defensive techniques not used anywhere else within the military from a young age, ensuring that they will serve as excellent guards. As a result of dedicating themselves solely to mastering defensive warfare, however, soldiers of the Blue Corps tend to struggle more than their counterparts when forced to fight offensively. Due to its role as the nation's primary line of defense, soldiers of the Blue Corps are required to work around the clock patrolling Leazas' borders to remain vigilant of enemy attacks, making it the most labor-intensive of the four main armies. Because of the large number of soldiers that make up its ranks, the general of the Blue Corps is required to possess excellent leadership ability to allow them to effectively organize and command their troops as a single unit.

It is currently led by Cordoba Burn, a man of great size and passion who is recognized across The Continent for his defensive excellence. Nicknamed "The Blue Wall of Leazas", Cordoba's own natural talent for guarding makes him a perfect fit for the position of general of the Blue Corps. Cordoba leads his men with dedication and vigor and always fights alongside his troops on the frontlines, making him highly respected by his men. A tireless worker, Cordoba is notorious for making regular patrols across all of Leazas' territory on the lookout for people in need of protection, further cementing him as the ideal man for leading the national guard.

Kinkaid Brambla: Lieutenant-General
Add a photo to this gallery 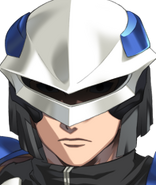 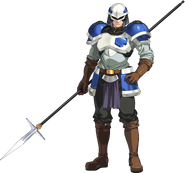 A group of Blue Corps knights' battle sprites in Kichikuou Rance.
Add a photo to this gallery
Retrieved from "https://alicesoft.fandom.com/wiki/Leazas_Blue_Corps?oldid=120463"
Community content is available under CC-BY-SA unless otherwise noted.