The Leazas Black Corps (リーザス黒の軍, Rīzasu kuro-no-gun) also known as the Leazas 1st Army (リーザス第1軍, Rīzasu dai-ichi-gun), is the primary branch of the four main divisions of the Leazas Army. It is the largest of the four armies by a sizable margin, and makes up the majority of Leazas' military force. Compared to the more specialized roles of its counterparts, the Black Corps serves as a general purpose unit designed to overwhelm the enemy through sheer force of numbers during large scale warfare. As a result, it is considered to be the backbone of Leazas' military, and plays a vital part in maintaining the nation's reputation as the most powerful country in all of The Continent.

The soldiers that make up the Black Corps are of well-rounded ability and don't specialize in any particular field, meaning that the vast majority of people enrolled in the Leazas military serve in it. In addition, due to its large size, the Black Corps appoints three lieutenant-generals as opposed to just one to oversee smaller sections of it. By dividing control among four people, organization and management of the massive army becomes substantially easier to handle. Because of the crucial role the army plays within the nation's defense and the large amount of skill and experience required to effectively lead it, the general of the Black Corps also serves as the supreme commander of all of the Leazas military, making them one of the most powerful figures in the entire country.

The Black Corps is currently commanded by Barres Province, a veteran knight who has loyally served the royal family of Leazas across three generations. A living legend, Barres is one of the few individuals in possession of both the raw leadership ability and sharp strategic mind required to operate an army as large as the Black Corps. While Barres normally leads only a small portion of the Black Corps directly in battle, leaving the rest under the supervision of his three lieutenants, he is also perfectly capable of assuming direct control over the entire unit when the situation requires him to, and his leadership skills are said to become even more astounding when he is in command over all of his soldiers at once. Barres cares about each and every one of his men with the same amount of love that a father has for his children, and works hard to ensure that he minimizes casualties whenever possible. His leadership combines passionate and authoritative commanding with a reassuring parental warmth, and brings out the full potential of his troops without fail in every battle.

Early on into the RA Era, old age prevented Barres from continuing his duties as general of the Black Corps, forcing him to retire from the position. He was succeeded by Arlcoate Marius, a young soldier in possession of a genius intellect who he had personally trained as his protégé for several years. Once shy and lacking in self-confidence, Arlcoate proved her talents to the world throughout the 2nd Dark Lord War, where she served as Leazas' representative strategist within the United Human Army, and now stands proud as the supreme commander of the entire country's army. While Arlcoate lacks the skills as a field commander that made Barres a legend, her talents as a strategist far surpass his, allowing the Black Corps to maintain its great strength under her leadership.

Jaro Jasrack: Soldier
Add a photo to this gallery

Arlcoate Marius: General (RA00??-)
Add a photo to this gallery 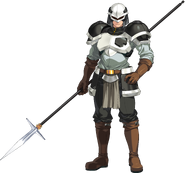 A group of Black Corps knights' battle sprites in Kichikuou Rance.
Add a photo to this gallery
Retrieved from "https://alicesoft.fandom.com/wiki/Leazas_Black_Corps?oldid=127540"
Community content is available under CC-BY-SA unless otherwise noted.