Ladle Man is a strange, enigmatic and disturbing individual dressed in nothing but an apron that wanders The Continent carrying a ladle with him at all times. Despite seemingly appearing to be Human, he lacks both a Level Cap and Skill Levels, suggesting that he is a different creature entirely.

During the events of Rance 01, Ladle Man participated in the Leazas Coliseum, where he succeeded in reaching 3rd place in the rankings before being fought and defeated by the adventurer Rance, who was attempting to fight against the coliseum's champion Yulang Mirage in order to prove his strength to her. Rance was greatly disturbed by Ladle Man's appearance, doubting his status as a human both before and after the match.

Ladle Man appeared again in Rance 5D, mysteriously living inside of Genbu Castle and managing a love hotel known as LADLE (L(et's) A(ll) D(o) L(ewd) E(xercise); お(オ×コ)た(タマ×ン)ま(マ×コ)。, O(…ko) ta(ma…n) ma(…ko).) in the desert oasis outside of the castle's western gates. It is not known how he entered the pocket dimension, though he had apparently been living in it long enough to establish his own business. Despite his off-putting aura, the hotel was well-maintained and fairly luxurious, though it rarely received any business due to the lack of people living inside of the castle. While Rance was persuaded by Rizna Lanfbitt to stay at the hotel, he found the price for staying overnight of 900 GOLD to be too high, and instead killed Ladle Man and stayed for free. Despite this, Rance later returned to the oasis hotel to find Ladle Man to be perfectly fine, causing the warrior to accuse him of being a Ghost and killing him again. Ladle Man survived this encounter as well, however, and locked Rance inside of the room he was staying in and began burning the hotel down as revenge, though he was quickly killed for a third time after doing this by Athena 2.0, who had travelled across the desert in search of her master. Both he and his hotel somehow survived this encounter yet again, and later ran into Rance and his allies while they were making their final attempt at escaping from the castle. Unlike the previous instance, Ladle Man put up no resistance to Rance refusing to pay for a room, and allowed him and his party to stay overnight for free.

Ladle Man is an incredibly unsettling-looking person. He strongly resembles a severely emaciated human male, and sports pale-white skin, sunken-in eyes, and, apart from a few loose strands atop his head, a totally hairless body. His only consistent articles of clothing are a small cloth wrap worn around his crotch and a frilly yellow apron. True to his name, he is never seen without a ladle in his hands.

Nearly everything about Ladle Man is unknown, though he is known to possess a sinister and unsettling air that stirs fear in the hearts of everyone he interacts with. His mannerisms are generally flamboyant and effeminate, which causes Rance to derogatorily refer to him as a "tranny" when speaking with him. He is seemingly always calm and happy, even in the face of death. Despite this, he is shown to hold grudges, as he attempted to kill Rance as revenge for killing him earlier, and was willing to burn his entire hotel down to do so.

Ladle Man is perhaps most notable for his ability to perform the Hanny Flash, the signature technique of the Haniwa. How he gained the capability to use this move is unknown, though it is possible that it was bestowed to him by the Hanny King, similarly to how Rizna Lanfebit acquired the Hanny's absolute magic resistance.

Besides the Hanny Flash, Ladle Man relies on his large ladle, which he wields as a club, to defeat his enemies in battle. He is a decently strong fighter, and was capable of reaching a high standing in the Leazas Coliseum, though his strength isn't particularly high when compared to seasoned warriors such as Yulang Mirage.

Beyond his fighting abilities, Ladle Man seems to have supernatural powers of some sort, being able to enter a pocket dimension designed to be inescapable, as well as apparently resurrecting himself from death. No explanation is given for how he is capable of doing either of these things and they remain a mystery, much like the rest of his character. 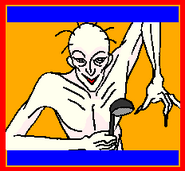 Ladle Man's appearance in Rance I.

Concept artwork of Ladle Man from the Rance IX manual.

Ladle Man from the Alice's Cottage 4/5/6 Guide.
Add a photo to this gallery