La Hawzel is an Angelic Dark Lord that belongs to the Hornet Faction, the force of demons of the Monster Realm united under the leadership of Hornet, as well as the younger sister of the Dark Lord La Saizel. Millenia ago, prior to their transformation, Saizel and Hawzel were once a single entity, a Goddess of Destruction named La Vaswald who was meant to participate in large scale annihilations of mortals performed under the orders of the highest authorities of the Gods Realm. However, during the Gele era, she was deemed worthless and La Vaswald was destroyed by Supreme Gods Planner and Roven-Pan. Following her destruction, the Goddess was split into two lesser Angel Knights, resulting in the birth of the Saizel sisters. La Hawzel was apparently the second to be born of the two, as she's called the younger sister, though they're generally considered twins. The two of them were then given as gifts from the Gods to Demon King Gele and they consumed her blood, becoming Dark Lords and pleading absolute loyalty to the Demon King, forfeiting their status in the Gods Hierarchy and living in the continent among the mortals instead. Due to the fact that Hawzel and Saizel were once a single entity, a strong connection between the two still remains to the point that feelings and emotions one experiences are shared by the other, up to and including physical pain.

After the death of Demon King Gi in GI1015, and the great divide between the Dark Lord community that followed over his successor, Hawzel chose to remain loyal to Gi's last will and joined the Hornet Faction, making herself an enemy of the Kayblis Faction. As such, she's spent the most recent years fighting for Kurusu Miki's right to become the new Demon King. On the year LP0003, she was sent along with Satella to become Miki's bodyguard, establishing a solid friendship with her new master in the process. They traveled for some time and protected her from attacks of the Kayblis Faction, as well as facing the hero Arios Theoman who was targeting the Demon King at the time. In their battle against the Hero, she along with Satella and Ogawa Kentarou faced defeat, but Miki was spared by the compassionate man who couldn't bring himself to kill an innocent girl. Some time after, they departed with Miki's group, leaving the human territory to return to Hornet's side.

While her role in the final game of the series Rance X remains unknown, her appearance has been confirmed.

Despite being an entity of a very high age, her position as a member of the Gods Hierarchy had prevented her from aging even prior to her transformation into a Dark Lord, conserving a young body that appears instead to be in her early to mid twenties. Her attire is reserved, sporting a long red cloak that extends all the way to her ankles. Behind it, she wears a purple legwear and white boots. Her eyes are blue and has two notably big horns, as well as wearing a red cap above them. Like her sister, she conserves her wings from her previous time as an Angel, and they are capable of shrinking in size.

Calm and collected, Hawzel thinks of her comrades before herself. She is a well-mannered and compassionate individual, being easily one of the most merciful and gentle-spirited Dark Lords. She is an honorable and seemingly gentle spirit that prefers to avoid confrontation as much as possible. She's strong-willed and not to be taken lightly, but she's an undeniably emotional and honest soul with a deep concern over the well-being of her comrades. Her sweet and friendly nature makes her a respectable and well-regarded person, with many of her subordinates holding a strong admiration for her. Additionally, because of her naturally agreeable personality, La Hawzel doesn't hold a negative view against humans and prefers to keep peaceful relationships with them. She's very mature and serene, making her one of the most dependable members of the group and regularly serving as a stabilizing figure to those around her. Because of this however, Hawzel dislikes to ask others for help, and she will not reveal her own problems or feelings to others unless she's absolutely breaking apart. She's very stubborn though, and attempts to keep herself as an independent figure that is always capable of assisting others when needed.

She has established a solid friendship with most of the members of her faction. She holds an immense respect and admiration for Hornet, who in return sees her as a reliable ally and a valuable friend. She also formed a close bond with Silky, and the two work together well thanks to their contrasting personalities. Among the Dark Lord community, most of its members see her with more or less respect, but she has a rather complicated relationship with her beloved sister La Saizel.

The polar opposite of Hawzel, Saizel is brash, immature, arrogant and often treated as a whippersnapper, and she absolutely hates to face the inevitable comparisons with her sister Hawzel. While the two hold a very special bond and deeply love each other, Saizel often ends up acting the opposite because of how much she hates to be compared with her, developing a grudge against her sister. These feelings went to such an extreme that they resulted in her joining the Kayblis Faction solely out of sheer rivalry with her sister. Rather than angry or upset Hawzel is mostly just concerned with her sister's choices, but the violent war between the two factions has largely distanced the two as Saizel keeps her rebellious disposition. Because Hawzel and Saizel were once a single entity, a strong connection between the two still remains. Feelings and emotions one experiences are shared by the other, including physical pain.

She also has an Apostle called Flame Scrivener but, for unknown reasons, she's allied with Kayblis rather than serving his master. Even odder, La Hawzel hasn't done anything about it and is ignoring this, despite the fact that she could use the blood control to bring her Apostle back.

As one of the individuals designated by a Demon King to become a Dark Lord, La Hawzel is one of the world's most powerful creatures. As a former Angel, she's capable of flying with the use of her wings, travelling through the sky with considerably faster speed than the majority of Dark Lords. As a Dark Lord, she also carries an Invincibility Field that makes her impregnable to any regular attack, making her a deadly opponent.

She is adept in Fire Magic, wielding a unique flaming weapon of her own called "Tower of Fire" and boasting an impressive Lv2 Skill in Magic. She employs this weapon to assault her enemies with barrages of flaming attacks, annihilating numerous opponents with ease. Despite this, her strength is not particularly remarkable for Dark Lords standards, holding one of the lowest Level Caps at 120 and with her current Level being 89. 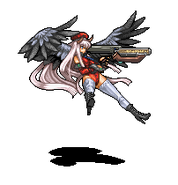