Kyou and Kinou are twin sisters, residents of Fresh Fish Island, and childhood friends to Aster, at least on his side. Little did Aster know, but the twins are actually dragons and the youngest members of the Witches of the Round Table, who have guarded Aster ever since the Arthur Tragedy. Having been long-since destined to marry Aster, in the same way other Witches of the Round Table have married his ancestors, the twins have also tried to guide Aster's development through indirect training and diet to suit their particular tastes.

The twins sent Aster on his journey not long after he came of age, pointing out the simple fact that Mother Eve's blessing prevented him from marrying both of them, unless he began adventuring and became a knight. The two wrote often, directing Aster to Camelot, but did not marry Aster or become a part of his adventures until its later stages. Due to the treaty between King Arthur and QD, the two dragons were only able to give minimal assistance, but were responsible for saving Croix Eden from death at the hands of the zombie virus, and later provided Aster with the memory of Sky Island, allowing him to teleport to the site.

In keeping with the treaty, Kyou and Kinou did not travel into other dimensions with Aster after he had completed his adventures in their current world.

The twins are very similar in terms of personality, though Kyou is outspoken and Kinou quiet. Both are quite fond of underhanded techniques that do not violate the treaty, including pranks and manipulation. They are both of the mind that they know best, both for Aster and the rest of their family, and given their centuries of experience, they often do. In spite of this, they have given Aster an incredibly poor education about the world around him, and basically every field but combat, cooking and sex. They are also somewhat maternal, and are quite fond of Aster's other wives, a fondness they express through frequent gestures, chores, and druggings.

The two are also notoriously sexually-minded, driven in part by their destined bond with Aster, but the twins seem to take this above and beyond. For evidence, one need look no further than Aster himself, designed to their ideal and from their experience. The twins have made sex a matter of primary education, diet and training for their protege, have used magic to enhance their own sexual experiences, and have since spread those efforts to the rest of their new family.

The twins' appearance as dragons is unknown, but they are said to be large enough to be unable to fit in a room of their house in Stallion.

Like all fullblooded dragons, Kyou and Kinou can teleport from place to place and are functionally immortal. As dragon twins, they share a unique subset of the teleportation power that allows them to swap places at will (and not necessarily with the consent of the other twin). They can transform from their human forms to dragon forms, but their capabilities in this form are unknown.

As Witches of the Round Table, the twins are presumably powerful beyond the average mortal, but their power is constrained by Arthur's treaty with QD. One ability they have been allowed to demonstrate is the ability to constrain a deceased soul to the mortal plane.

The twins are also experienced poisoners and druggists, with incredibly strong knowledge of herbal lore, pharmacy, and concealment. They are also among the world's best cooks, and are particularly fond of combining the two fields to create drugged food so irresistible that victims will eat it willingly. 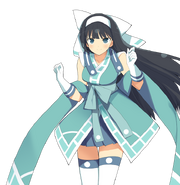 Kyou's sprite from the wives' screen.

Kinou's sprite from the wives' screen.

Concept art of Kyou and Kinou from the Evenicle manual.
Add a photo to this gallery
Retrieved from "https://alicesoft.fandom.com/wiki/Kyou_%26_Kinou?oldid=102572"
Community content is available under CC-BY-SA unless otherwise noted.