AliceSoftWiki
Register
Don't have an account?
Sign In
Advertisement
in: Articles with Major Spoilers, Characters, Female characters,
and 2 more

Kurusu Miki, also known by her demon name Little Princess, is the 7th Demon King of the continent selected by Demon King Gi shortly before his death. Originally an ordinary teenage girl from Dimension 3E2 (an alternate dimension that largely resembles real-life Earth) she was captured by Dark Lord Ramon C. Burksham, a Dark Lord capable of travelling trough dimension. As Gi was at the dusk of his era he decided to search for a successor in other worlds after failing to find a qualified candidate in the continent and, upon encountering Miki, immediately selected her as the one suitable for the role. As she was kidnapped her childhood friend Ogawa Kentarou followed her to Ludo-Rathowm's world and attempted to rescue her, but by the time he found her Gi had already passed on the blood of the Demon King onto her, turning her into the new Demon King and starting the new LP Era. Refusing to accept the new position she did not desire, the two run away in hopes to search for a way to turn her back into a human, as well as a passage to return to their world. They quickly discovered Hirami Lemons, a special fruit that allows her to retain her personality and partially stops her transformation into the chaotic persona of the Demon King, and while they must be consumed frequently to maintain the effects, it allowed her to retain part of her humanity while they searched for a definitive solution for their state of affairs.

Gi's subsequent death and Miki's escape however resulted in the Monster Realm being left headless, with no Demon King to rule among Dark Lords and Monsters, and an internal conflict bursted immediately. The strongest Dark Lord Kayblis refused to accept Miki and instead took advantage of the situation to become Demon King instead, promising Dark Lords a world where monsters dominate humans and gathering all the Dark Lords that agreed with him, assembling the Kayblis Faction. Gi's daugther Hornet on the other hand decided to respect her father's last will of making Miki his successor, and formed her own Hornet Faction with Dark Lords most loyal to Gi in order to support Miki as the new Demon King. With the Dark Lord community divided the two faction entered in a fierce war that split the Monster Realm in two.

In the very first year of the new era LP0001, Miki and Kentarou traveled all the way to the Kingdom of Leazas learning how to live on their own in this new world as well as hiding from the Dark Lords that are chasing after them. At some point when Miki was wandering alone in the Leazas Castle she briefly encountered the adventurer Rance, who was at the time investigating the case of the missing Hikari Mi Blanc during the events of Rance 01. Depending on the player's decisions, and if careless enough, Miki can potentially awaken her powers in a sudden emotional burst when he continuously molests her, killing the warrior in an instant and resulting in a game over for the player. Canonically the two did not make any other notable interactions and would not remember each other after this. She and Kentarou will then continue to stay in Leazas for some time. The following year in LP0002, the two were found by the Dark Lord from the Hornet Faction Silky Littleraisin, who tried to convince them to join them so that they could be under their protection, but Miki and Kentarou escaped instead. They were also targeted by the force of Maid Apostles that serve Dark Lord Kesselring, but they managed to escape from their grasp as well. The two then decided to leave Leazas and pay a visit to the sage Ho-Raga, an immortal mage with immeasurable knowledge. They ask him about methods to return to their dimension, who tells them about a portal hidden in the nation of Zeth.

After travelling to the magic country and living an extended adventure, they finally manage to open the gate and return to their world safely in the year LP0003. However, after only a week they quickly ran out of Hirami Lemons and they were forced to return to the continent in order to get more after Miki was getting dangerously close of definitively transforming into the Demon King. Upon returning, the dimensional gate is somehow destroyed, rendering unusable their only known passage to their homeland. Furthermore, pursuits from Kayblis' forces become more and more fierce. In order to keep her safe, Hornet sends Dark Lords Satella and La Hawzel to protect Miki, and they quickly become friends. They travel together for some time with the Dark Lords as their bodyguards until they take shelter in the AL Church headquarters, where an exhausted Miki peacefully sleeps. Their tranquility is short-lived however as the Guardian Hero of the World, a man named Arios Theoman, heard of Miki's identity as the Demon King and stormed the place in an attempt to take her life. While Kentarou, Satella and La Hawzel attempted to fight off the Hero, all three of them were defeated by the valiant warrior. She remained asleep during the whole encounter, becoming an easy target for the victorious Hero, but she was spared as Arios couldn't bring himself to kill a young girl in her sleep, even if she was the Demon King, and he left immediately. The group would then leave the headquarters and continue with their travels.

The following year in LP0004, she parts with Satella and La Hawzel as they return to the Monster Realm where war with the Kayblis Faction continues to wage. Kentarou and Miki then decide to go back to Leazas once again, where they open a humble restaurant. Surprisingly, the restaurant ends up being quite popular due the exotic dishes it serves, meals prepared from recipes from their world that are unseen to the inhabitants of the continent. Unfortunately, they're attacked by monsters and forced to run away.

In LP0005, the two went to JAPAN, astonished by the similarities with the historical Japan from their homeland. Kentarou then joins a house as a commander in order to pay for their stay, and he takes active part in war against the Oda House as a result. After his house falls however, the two escape and meet Rance and Sill by chance, agreeing to join the Oda House. Some time after a Demon Army is formed by Xavier to destroy JAPAN, Kentarou will engage in battle with Apostle Seiryuu where he's mortally injured. The shock of seeing Kentarou in a state of near death momentarily threw Miki in despair, and she accidentally unleashed her powers obliterating everything in the vicinity, including Seiryuu. Desperate to save Kentarou's life Miki gave him her blood, transforming him into a Dark Lord in the process. While his life was saved, she was quickly overwhelmed with guilt and regret as she robbed him of his humanity like it happened to her, leading her to run away immediately on a fit of panic. The Oda House entered in a state of alert as they searched for her all over their territories, but as she ran out of Hirami Lemons, Miki found herself progressively losing her sense of self and transforming into the personality of the Demon King, occasionally unleashing destruction where she went as she failed to control her emotions. When Rance and Kentarou find her, she has momentarily transformed into Little Princess. With her personality twisted she become vicious and cruel, toying with Rance and his allies for her own amusement until she launched a freezing spell towards Rance. The attack was blocked by his slave Sill Plain, who was instantaneously frozen in place, making Miki to awake again as a result of the shock. Kentarou approached the distraught Miki and convinced her to take a lemon again to suppress her power. After the incident Miki was unable to free Sill, as she was placed under a strong freezing spell by the magic of the Demon King.

Later on Miki was present during the Battle of Tenma Bridge where JAPAN's forced fought against Dark Lord Xavier to prevent him from sinking the country by destroying the Tenma Bridge. After the battle was over and the demon was successfully slain by Rance, she destroyed Xavier's Demonic Blood Soul, erasing him from existence and preventing him from ever resurrecting again.

Following the unification of JAPAN, Miki and Kentarou left the country to continue with their journey, and their adventures since then have remained unknown.

Miki is a kind and optimistic girl. She adapts easily to the world of her kidnapper (there's no school, and she gets to adventure with Kentarou). She's usually friendly to strangers and trusts people with ease.

They befriended Dark Lords Satella and La Hawzel from the Hornet Faction during LP0003, who were sent by Hornet to act as Miki's bodyguards.

She learned about sex from hostesses of inns she stayed at, and really wants to take her relationship with Kentarou to the next level. However, Kentarou seems completely oblivious to her attempts at seduction, which makes Miki depressed. She blames it on her undeveloped body (although she is technically 19 now, her body stopped growing at 14 when she drank the blood of theDemon King).

Kentarou is the most important in the world for her and she would do anything for him. She can't stand the thought of him dying and would be unable to continue if he was no more, to the point that in the few non-canon instances in which Kentarou has been killed, Miki fully became the Demon King Little Princess.

There's been a few handful time in which Miki has gone under control and awaken her true Demon King Personality Little Princess. When fully awakened her personality wildly changes. She becomes cruel and sadistic and enjoys causing destruction and toying with her victims. She's very proud and dislikes receiving help, claiming that she can handle any situation.

While Miki has not fully "awakened" as the Demon King yet (thanks to the Hirami Lemons), the incomplete powers she has are already incredible. She has the Invincibility Field typical of Dark Lords, that only certain weapons, the Guardian Hero of the World , or the high level gods and Holy Beasts can get through.

Even without the invincibility field, her body is incredibly strong. For example, in Kichikuou Rance, she had about 3000 times more HP than high level humans, and in Sengoku Rance the punches she threw when Rance made advances on her would cause explosions and blow craters into the floor.

When she's psychologically unstable she sometimes uses an attack called Kiechae Bomb, a super explosive attack that can wipe out everything in her surroundings (not the best thing to do when you have allies nearby).

She can't control this attack and can only perform this attack by accident when she's mentally unstable or during rage bursts. She has accidentally killed many people with this attack.

MIki and Kentarou in Rance VI 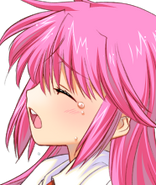