Kurohime is a long-time guest of the Shimazu House. In fact, she has been there for many generations and is famous for her never ending beauty that never ages. There are rumors that her everlasting youth is the result of a curse, but in reality, this is due to being the daughter of the Dark Lord Xavier. During one of Xavier´s revivals he raped many women, but Kuro´s mother was the only one to survive both the rape and the pregnancy, although she did not survive childbirth.

She is greatly admired by the Shimazu brothers, who would do anything for her and constantly vie for her affections, but her feelings for them is more maternal than romantic and sees them as her valuable children. Though her father had given her the name of Kyouko, after his imprisonment she renamed herself Kurohime, leaving her original name and birth lost to time, with only her demon father and his apostles still calling her as such.

During the events of Sengoku Rance, after Xavier was revived with most of his power but was quickly forced to retreat from Oda, he retreated to the Shimazu province, intending to take over the Shimazu House and use their territory as his new base of operations before setting his own Demon Army to conquer JAPAN. While the Shimazu brothers intended to fight him, Kurohime intervened and claimed that they wouldn't be able to beat him, before agreeing to surrender as long as Xavier promised to not kill the Shimazu brothers, a deal to which he agreed.

The Shimazu House was renamed as the Demon Army and the Shimazu had no choice but to join as sub-commanders, with Kurohime being held as a hostage in Xavier's personal apartments. It was later revealed that as the demon's daughter, which is the reason for her immortality, she has the unique ability to break powerful seals as well. Using this power, she first released Xavier from the remaining effects of his seal, bringing him to his full power once more, and under the suggestion of Genbu was then used to break the seal of the Soul Binder, a powerful youkai whose curse could bring devastation to JAPAN.

During his personal moments of leisure, Xavier would spend his time raping women, but was continuously frustrated by the fact that they would quickly die from his own excess of power during the intercourse. Instead, he came to realise that, as his daughter, she would make a more durable toy, and heavily raped her several times as a result.

True to the crush the Shimazu brothers have for her, Kurohime is an extraordinarily attractive woman with a gentle and mature disposition. She has brown skin and long voluptuous black hair as well, coupled with a set of strong blue eyes. Probably due to her status as the child of a Dark Lord she has a few marks from birth on her body, two black in her forehead, as well as a strange red mark in her chest and her arms. She's an incredibly beautiful women with a hourglass figure and a body that doesn't age and stays young forever, making her one of JAPAN's most legendary beauties.

Personality-wise, she's nothing like her brutal and savage father as she is a caring and selfless woman that is deeply worried for the fate of JAPANese. Being alive for several centuries has granted her vast experience and knowledge, making her a very rational woman that often searches for compromises and parley to avoid casualties. As she despises her father's cruelty, she never attempted to release him from his seal over the multiple centuries of his confinement, even though with her power she could have done at any time with ease, a fact that greatly incurred his wrath. She can be very melancholic, as she often felt a degree of responsibility for the horrors her father has repeatedly wrought over JAPAN as his only daugher, and ends up blaming herself even more when she is several times forced to comply with her father's wishes which only ended up increasing his power.

However she is a very strong-willed woman, with a life surrounded by terrible hardships early on, and she could take on the horrific torturous rape and overall abuse she suffered from her father without much mental scarring. She worries over others more than she does about herself, which is the reason why Xavier decided that she would kill every last one of the JAPANese excluding her, as a punishment for her "rebellious nature" towards him.

In Ran's route, she is greatly indebted to Rance for defeating Xavier before he manages to recover his power, and offers to sleep with him to show her gratitude. While she wasn't a virgin, she claimed that she had little experience in sex and revealed that she's actually quite sensitive, side that is not shown in the True route as her body had grown number after her father's treatment.

Like stated earlier, due to being a Dark Lord's daughter, Kurohime was born with a wide set of unique abilities that are cannot be in the vast majority of the creatures living in the Continent. She doesn't age and can live forever, but she can still be hurt and is as susceptible to pain as regular humans are. However, her body is much more durable and stronger than most, since she can casually take wounds that would result in death for regular people. She also seems to have a natural regenerative ability that allows her to recover from her injuries much faster than normal. In Sengoku Rance, she was seen going through many painful abuses from Xavier in many different ways, such as having both her wrists stabbed or having a knife thrusted deep through her throat, yet she was able to recover after a short period of time without carrying any lasting consequences.

Her most impressive and unique ability however is her ability to break any seals. It is unknown if she would be capable to break more powerful seals, like the one that was placed onto Gele by Chaos, but she proved to be powerful enough to dispel seals placed onto Forbidden Youkai deemed extremely dangerous such as the Soul Binder. In addition, she could easily cast off the seal that was placed on Xavier, despite it being an extremely powerful seal made by the devil Geppei himself and passed down for generations for the specific purpose of keeping Xavier sealed, proving the immense seal-breaking potential of Kuro.

Despite all these incredible abilities, she holds no combat ability whatsoever, being incapable of fighting in the battlefield or commanding an army. However, her vast experience makes her a valuable war advisor that should not be ignored. 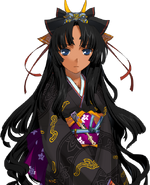