Kumiko is a recurring character from the Toushin Toshi series, with multiple incarnations.

Kumiko is a beautiful young woman with long pink hair and a tragic past. Her father entered the Toushin Tournament and won, but he never returned or even contacted Kumiko or her mother. Her mother became ill, and eventually died. With no family left, Kumiko set out for Toushin City to search for her father who she suspects is in the Toushin Mansion, residence of the tournament champion.

Kumiko's stagecoach comes under attack by a group of Green Hanny on the way to the city, but she is saved by the swordsman Custom. She offers herself as his partner for the tournament so that he will escort her and hopefully win, gaining them entry to the mansion. During the quarterfinals, Custom was paired up against Raipiraki, a weredragon. He faced a conundrum: the only way to harm a weredragon was to use a Dragon Slayer sword, but the only sword available was cursed to only be drawn by women, who would become corrupted by it. Kumiko nevertheless went to the dungeon on her own and risked the sword, overcoming its corruption and giving it to Custom.

During the course of the tournament, Kumiko and Custom fell in love and became a couple after he won the championship. Unfortunately, their happiness was short-lived, as they discovered Kumiko's father had become brainwashed and was ruling over the city as a slave-dealing tyrant. Kumiko fell into a depression, but Custom continued his investiation and eventually freed her father, and then later Kumiko herself after her father's handlers turned on everyone involved. During the rescue, Custom caused YORA, the mastermind, to mutate and become berserk, causing him to kill his minions. One of them, MIKA, bequeathed Kumiko her naginata, the Dragon Naginata, which she used to battle YORA. Once YORA was defeated, Custom and Kumiko began a life of adventure together.

Kumiko is a bright young woman, utterly devoted to her father. She travelled across the world to find him, even knowing she was not suited to the task alone, but ready to face it regardless. Her heart was broken into otherwise uncharacteristic inaction after discovering he had forgotten her under mind control, but after he had recovered she returned quickly to her old self.

Kumiko's most obvious identifying trait is her bright, pink hair.

Kumiko's greatest strength is her incredible strength of will, able to overcome the curse of the Dragon Slayer sword, first to prevent herself from using it against Custom (she only attacks him with her fists) and then to break the curse entirely. While Kumiko was untested in combat and unable to enter the Toushin Tournament on her own abilities, she shows a great deal of potential, able to stand side-by-side with several tournament contenders in the final fight against YORA.

Makes a cameo appearance as the level goddess of Nakuto.

Kumiko is one of Nanas' many summoned heroes from other dimensions. While she occasionally fought with a sword or naginata in the original Toushin Toshi, she is a magical archer in these games. 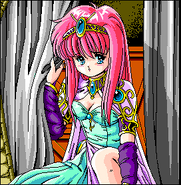 Kumiko possessed by the cursed Dragon Slayer in Toushin Toshi.