Kumano Gorou was a well-known swordsman from the nation of JAPAN.

A powerful man with a love for fighting strong opponents, Kumano spent much of his life wandering across the country in search of worthy people to battle. Over the course of his travels, he won several fighting tournaments and defeated the masters of multiple prominent dojos, gaining him considerable fame in the process. Over time, he amassed a legion of dedicated followers who traveled with him to observe his technique and fight at his side.

During the events of Sengoku Rance, Kumano developed an interest in Rance, who had become the shadow ruler of Oda House, after hearing rumors of his great strength and swordsmanship. Kumano, aided by his followers, entered into an Oda encampment where Rance was resting after a battle to challenge him to a duel. While the group was spotted by the Kunoichi Suzume the instant when they approached the camp, she allowed them to pass through without resistance due to Rance having earlier requested her to allow him to fight against the strongest assassins personally. Kumano and his followers then fought against Rance, Suzume, and Rance's slave Sill Plain, where they were defeated and killed. Rance remarked afterwards that the fight was bothersome, prompting Suzume to suggest that he travel through dungeons and raise his Level.

Kumano makes his most prominent appearance in Uesugi Kenshin's route, where he is revealed to be one of the candidates in the Emperor's Race to determine the next leader of JAPAN. If Oda is able to successfully scout out the location of Kumano's house, Kenshin will gain the option to challenge him to a duel to remove him from the race and obtain more points for herself. When challenged by Kenshin, Kumano reveals that he has no interest in becoming emperor but is extremely excited to have the opportunity to fight against the Goddess of War.

Should Kenshin fail to challenge Kumano following a certain interval of time, the Dark Lord Xavier, possessing the body of Oda Nobunaga, another candidate in the race, will ambush him on the middle of a road. Kumano is incapable of harming Xavier due to the Invincibility Field surrounding him, causing him to be effortlessly killed.

Kumano was a large man with black hair that he wore tied behind his head. He possessed dark circles around his eyes and always wore an intense and ferocious smile on his face.

A man with a fiery spirit, Kumano strove to further test his skills as a swordsman. Rather than ally himself with any one nation, he instead chose to fight solely for himself, challenging only warriors who interested him. Kumano was very respectful toward these individuals, bowing politely to them both before and after their battles, and never showing any malice after losing. He had no interest in anything outside of developing his abilities, to the point of turning down the chance of becoming emperor of JAPAN when the opportunity presented itself to him.

A highly-skilled and powerful swordsman, Kumano was a deadly force in combat. He possessed a high Level Cap of 40, which he had reached by the end of his life, making him one of the most powerful Humans on The Continent at the time of his death. Kumano's great strength was recognized by all who knew of him, with both 3G and Suzume considering him to be a difficult opponent for even the exceedingly strong Rance and Kenshin to fight against. Kumano's skill was also indirectly acknowledged by Rance himself after he was killed by him, where the selfish swordsman complained about the fight tiring him out.

In battle, Kumano expertly wielded a sword. His swordsmanship was said to consist primarily of hard-hitting attacks that prioritized raw power over all else. While Kumano's fighting style was highly effective at overpowering ordinary opponents, it was completely ineffectual when pitted against a Dark Lord such as Xavier, resulting in him being slaughtered effortlessly during their duel. 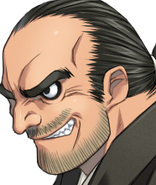