Krutche Muffin is the vice-captain of the Order of Knights of the remarkable Rance Castle, the residence of the extraordinary adventurer Rance. Despite being only the second-in-command of the Castle garrison, she's far more skilled and competent than her boss Sanakia Drelshkaf.

Some time prior to Rance X Krutche, looking for an easy and undemanding job, one day took the examination test personally instructed by Sanakia to enroll into the Rance Castle Guards, but was slightly disheartened after seeing the strict nature of the examiner and was thinking about failing on purpose. However, as Sanakia noticed that she belonged to the prestigious Muffin family line of fencers, the Captain of the Guards decided to act as her sparring partner herself in order to evaluate her ability. Their battle ended in the blink of an eye as Sanakia was taken to her knees in a single blow delivered at a blitzing speed by Krutche. Despite her loss, the defeated captain challenged her multiple times but with unchanging results until she was simply knocked out, prompting Krutche to awkwardly take her examiner to the infirmary. Strangely, Krutche was charmed by Sanakia's bold and stubborn disposition and decided to become her subordinate, much to her confusion. Nonetheless, Sanakia vowed to defeat Krutche in a duel one day as Krutche says that she will be looking forward to it.

During the events of Rance X, Krutche appeared as one of the most important members of Rance's Order of Knights, defending the castle from possible invaders that might appear. When the Rance Castle is threatened by a large army sent by Kayblis in an effort to crush Rance's squad, Krutche takes an active role in the frontlines of the Battle for Rance Castle along with the other members of the Order of Knights commanded by Sanakia. Unfortunately, her captain was quickly defeated after she recklessly charged towards the enemy, forcing Krutche to take a leading role for a brief period and withdrawing her forces. She then took her boss to the infirmary where she started nursing her until they got a visit from their Lord Rance, who had overheard of Sanakia's condition. After confirming her well-being however, Rance decided that it was appropriate to "punish" Sanakia for her defeat, making Krutche help him with it, which she enthusiastically accepted. Following this, Rance returned to the battlefield while Krutche waited until Sanakia recovered before going back to battle themselves.

Later on into the game, Krutche is seen taking her night shift as the Rance Castle's gatekeeper along with another guard. During this time the Maereeta Squad, the elite monster squad formed as a response to Rance's Dark Lord Extermination Squad, appeared to infiltrate into the Castle and kidnap the dormant Demon King Kurusu Miki. Upon seeing her guarding the entrance, Muscle made a quick attack in order to sneakily knock her out, but Krutche's staggering reflexes allowed her to block his attack, much to his surprise. The two engage in a short combat, where Muscle finds himself on the defensive against the gatekeeper until Needle takes Krutche's partner hostage, giving Apache a gap and knock her out with a decisive blow. She was taken to the infirmary shortly afterwards and warned the Castle's staff about the infiltrators upon waking up.

At some point during the war, Krutche would be contacted by a man named Shinohara, who has served as the butler of the Muffin family for years. He informs her that her older brother and successor to the family line has died in battle. He then expresses his desire for her to return home, but Krutche deduces that he's under her parents orders and refuses, claiming that she has no desire to be the heir of the Muffin family. It is then revealed that she was disowned as she chose to left in order to live free life based on her own desires. Krutche thinks that they might want her to return in order to conceive a child and ensure the survival of the Muffin family, but Shinohara refutes Krutche's thoughts, claiming that her father has been extremely concerned over her well-being since the war began. Krutche merely stays silent however. As the butler leaves, she asks him to deliver a message to take care of themselves, which the butler humbly accepts. Once Shinohara leaves, Sanakia appears, apologizing as she has overheard the conversation. Krutche laughs stating that her captain has some nasty hobbies, but Sanakia tells her to go back home before hitting her, telling her that she won't hold her down if she wants to leave. She asks Krutche if she isn't worried about her family, to which she admits that she is but that she would be more worried about her captain if she left.

During the final mission to defeat Kayblis in the "From the Sea" route, Krutche is among the people that stay at Rance Castle, along with the rest of the Order of Knights, in order to defend it from invaders while Rance's group sneaks into Kayblis' hideout.

Krutche is a young woman of light skin, red eyes and a long wavy dark red hair. She sports the standard uniform of the Rance Castle Knights, consisting of a green long-sleeved shirt and skirt, as well as a gray armor on top with a shoulder pad adorned with the letter "R" on it.

She is an extremely relaxed and easy going individual. Because of her laid-back disposition, it often looks like she doesn't take things seriously and might come off as somewhat scatterbrained, but she's infact a very sharp and witty person. She gets along quite well with her Lord Rance, as he's not very demanding of his guards and they share a similarly playful and lazy disposition. She has a slightly perverted side as well, and is quite experienced in the bed with both men and women. She usually talks in a non-chalant, very calm and relaxed tone while displaying a very loose and calmed expression. However, and surprisingly, on rare situations when she's taken by surprise and feels threatened, she becomes very tense and stiff to the point that she's unable to go back to her usual easy going self until after a couple minutes.

Despite being very strong and talented, she dislikes fighting as she finds it too tiring and troublesome. She's generally very lazy and prefers to spend her time goofing around rather than attending to her duties and responsibilities, although if the situation demands it she takes her job as a guard seriously. She does not train because she feels like she's already at her peak, and regularly skips her captain's training sessions. Because of her untroubled disposition towards her position she causes her boss Sanakia a lot of stress, often getting scolded by her for neglecting her duties or just generally making her mad in one way or another. In spite of this, she has a lot of appreciation for her captain and is very fond of her character, finding her rash and chivalrous nature amusing but also genuinely respectable, motivating her to be her subordinate despite being much weaker than herself, even going as far as refusing to take part in the battlefield if it's not under her command unless it's a situation where there's no other choice. Because she's well aware of her boss' mediocre combat ability, she's frequently looking after her in battle, claiming that she would be very sad if she perished.

Beyond her usual carefree and lighthearted self, Krutche also has another side to her. In particular when dealing with matters related to her family she becomes extremely serious, cold and distant, displaying little of her usual joviality. She has a seemingly complicated relationship with her family, especially with her parents, with who she distanced from to avoid being tied to her family line. However, she still retains some level of concern over them, admitting to Sanakia that she was worried for them during the war, a feeling that was apparently reciprocal.

She's on good terms with Heidi Pankrau, who she sometimes takes bread while the maid covers her when Sanakia is chasing her in exchange.

Krutche is a very strong fighter with an uncanny ability to remain composed in the battlefield. Displaying a level 1 skill in Sword Combat that she has taken to its limit, she's a master swordswoman raised by a prestigious family of fencers. She has an unknown but incredibly high Level Cap, as her current level during the 2nd Dark Lord War was the impressive value of 57. Additionally, it can be inferred that she levels down very slowly as she rarely trains to keep up with her level. Her fighting ability is top-class, and was considered a cut above the rest even among the members of her family. In battle she relies on quick and continuous strikes, overwhelming her opponent with both speed and power to the point where even Muscle, a commanding member of the Maereeta Squad, found himself at a disadvantage when fighting her, and described her as a fearsome opponent.

She also possesses an incredible leading talent, allowing her to swiftly take command of the Order of Knights of Rance Castle with great efficiency and composure if the situation demands it, with Sanakia acknowledging that even at this her ability surpasses hers despite having specialized on such field and having way more experience. 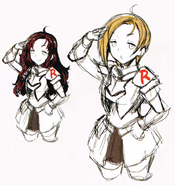 Concept artwork of Krutche from the Rance X Guide Book.