AliceSoftWiki
Register
Don't have an account?
Sign In
Advertisement
in: Articles with Major Spoilers, Characters, Male characters,
and 6 more

Kousaka Yoshikage was a master Ninja and one of the four great generals of Takeda House.

Prior to the reformation of Takeda, Yoshikage was a high-ranking member of the Iga ninja clan and the head of the powerful Kousaka family. He was responsible for raising the future Ninja King and founder of Iga House Inukai from infancy.

At some point in the past, Yoshikage declared the Kousaka family's independence from the Iga Clan, and formed his own nation on some of the land that would go on to make up the Takeda territories. Yoshikage would later participate in a meeting with the leaders of the three most powerful families in the areas bordering his own with the goal of bringing peace to the chaotic JAPAN. While all four of them excelled in different areas, they understood that, even if they were to combine their powers, the country could only be completely unified if it had a single leader to follow. This led to the quartet creating the character of Takeda Shingen, a "living god" clad in red who excelled in all areas that the people of JAPAN could look to as a leader, when in reality it was simply the four of them each taking turns in the armor to utilize their own specific talents. Yoshikage's mastery of the ninja arts allowed Takeda House to excel in sabotage and informational warfare.

During the events of Sengoku Rance, the forces of Oda House, led by Rance, succeeded in taking Takeda's territory and destroying the nation. As Takeda Castle burned to the ground, the four generals had one final discussion about their next plan of action. While Baba Shouen believed that they should have launched one final attack on Oda in order to die in a blaze of glory, Sanada Tourin believed that they should have retreated in order to continue towards their goal of bringing peace to JAPAN. While Yoshikage realized that Tourin's words were true, he could not overcome his pride as a warrior and joined Shouen in his assault against Rance, resulting in his death.

On additional playthroughs, Rance can gain the option of attempting to assassinate Takeda Shingen prior to destroying Takeda House, which results in him exposing the truth about his identity and forcing the four generals to disband and ally themselves with different houses. Yoshikage can be fought and captured in battle during this time, allowing him to fight for Oda as a commander. After joining Oda, Yoshikage forges a friendly rivalry with the Kunoichi Suzume due to his ability to constantly best her in games of rock, paper, scissors. He can also potentially be reunited with Inukai, who succeeds in defeating him in the same game.

Contrary to the intimidating reputation of Takeda, Yoshikage had a very unassuming, non-threatening appearance. He was a middle-aged man with long, graying hair tied in a thin ponytail who wore a simple kimono bearing the symbol of Takeda House. He always wore a calm, friendly smile on his face and his eyes were always shut.

Compared to his colleagues, Yoshikage was an incredibly laid-back and carefree individual both on and off the battlefield. He showed warmth and kindness to friend and foe alike and enjoyed making jokes even during intense situations. Despite this, he took Takeda's mission to bring peace to JAPAN just as seriously as his friends did, and put a great deal of thought behind his choices when deciding the actions of their nation. He faithfully followed the code of the samurai to the end of his life, choosing to die on the battlefield over surrendering, though he was aware that his choice to do so was selfish and apologized to Sanada Tourin for forcing him to take on all of the weight of their mission. His death continues to weigh heavily on Tourin, who thinks about him and his comrades long after JAPAN had been conquered.

He was the man who raised Inukai, and, alongside Gekkou, was responsible for training him into an incredibly powerful ninja. Yoshikage still treated Inukai somewhat childishly and was amused by the amount of effort he put forth to appear stoic and serious. While Inukai was somewhat bothered by Yoshikage's carefree attitude, he recognized him as a highly talented person and greatly respected his abilities.

When recruited into Oda House, Yoshikage forms a fast friendship with Suzume, who shares his similarly deceptively cheerful disposition. He is one of the only people that is capable of outdoing Suzume, which seems to annoy her to a degree, though she also enjoys spending time with someone who enjoys having fun as much as she does, and Yoshikage in turn finds her energetic personality to be refreshing.

Contrary to his unintimidating appearance and personality, Yoshikage was a highly talented and very powerful ninja. He possessed an excellent Level Cap of 55, the highest of any ninja currently known in the series, potentially making him the most powerful ninja in existence while he was alive. His speed in particular was noted to have been legendary, and allowed him to appear and disappear unnoticed even when around other ninja.

He was a true master of the ninja arts who was highly skilled in assassination and espionage to the point of earning praise from both Suzume and Inukai, the two people most frequently recognized as the most powerful ninja. He was also an excellent teacher, and it was through his training that Inukai was able to catch the attention of the legendary ninja Gekkou at an early age.

In addition to his great talents as a ninja, Yoshikage was a skilled military commander who could lead a large army with an excellent amount of skill and precision. Like all members of Takeda House, he was capable of utilizing the secret technique Fuurinkazan to further boost the abilities of his troops in battle. His talent for performing fast and accurate assassinations led to the other three trusting him with the important duty of being the first of the three to attack enemy nations during assaults, showing the great amount of belief his friends placed in his skills. 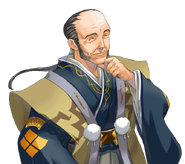 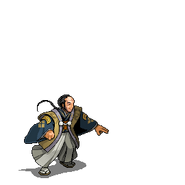 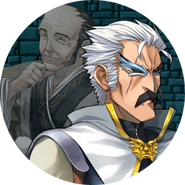 Yoshikage's brief appearance in Rance IX, being remembered by his friend Tourin.

Concept artwork of Yoshikage from Hanihon 8.

Concept artwork of Yoshikage from the Sengoku Rance guide book.