AliceSoftWiki
Register
Don't have an account?
Sign In
Advertisement
in: Articles with Major Spoilers, Articles needing a Quote, Characters,
and 6 more

Princess Kou is the renowned beauty of the Oda House. She's a gentle and compassionate young girl that took the lead of the Oda house in place of her dead brother during the events of Sengoku Rance. She's technically the ruler of JAPAN now, since the Oda House unified the country in the sengoku era, but she isn't acting like the political leader of the country on her own and instead leaves government to her advisors.

She grew very attached to Rance and is like a little sister to him, specially after her brother's death. Rance has a soft spot for her and is very protective, although that's a trait that many in the Oda House share. 3G in particular is very over-protective and caring for her.

She was born in the year GI1008 and her father died during The Great Youkai War but she doesn't remember much about it since she was just a newborn at that time.

Kou is a very obedient and caring girl and is loved by many in the Oda House. She's a bit naive and curious as well, but that's probably due to her age. Many tend to avoid the subject when she's asking questions about things she doesn't know and is too young to be told about. She's very polite and is usually embarrassed by her brother's or Rance's carefree attitude.

She deeply loved her brother and was very concerned about his health issues. When he ultimately passed away, she was very depressed and Rance helped her to get over the depression over time and ended up seeing Rance as a new brother figure.

She's always trying to be useful in any way she can and is very efficient and perfect in everything, to the point some are impressed by her skills despite her young age. However, she's a complete failure at cooking and has even gain some fame for how awful she's at it. There's an event in which Kikkawa Kiku, an expert cook from the Mouri House, tries to teach her how to cook proficiently and the result was an utter failure that even Kiku couldn't comprehend how it happened. Nobunaga claims that her Dango could kill people, although he was mostly joking when he said this. Kiku however, who's also a ninja and an assassin, seriously said that she does have talent for poisonous food, although Kou doesn't like that skill at all. The only person who likes her cooking is Galtia, who constantly praises her Dango as the best he has ever eaten.

She doesn't like war and bloodshed but chooses to go to the frontlines, despite the complaints of 3G and Katsuie. She is a good friend with Kazemaru due to their close age and the similar trauma they experience.

While most of her short life she wasn't concerned about fighting or getting stronger, after her brother body was possessed by Dark Lord Xavier, she became a soldier leading warriors from the Oda House in the front lines. She wields a JAPANese iron war fan and commands her troops, mostly for protection and defending allies. She has a Stategy Lv1 skill, which means that with time she will become a very capable leader and tactician.

Kou is not the aggressive type in combat and is mostly focused in protecting her companions and avoid as many casualties as possible. She has a cap of 40 and her current level is 10, since she was never training until recently. In battle, she has a heavy armored samurai clothing. She has Self-defense Lv2 and a Guard Lv1 skill, making her extremely proficient in defensive battles.

She also has a Lv1 skill in poison that, while it's usually used as a joke, is probably the source of her horrendous cooking skills.

To read about the version of Kouhime despicted in the non-canon Kichikuou Rance refer to:

Kou's portrait with an armor in Sengoku Rance.

Kou's portrait with an armor in Rance Quest. 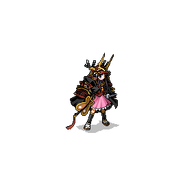 A sketch featuring an older Kou. 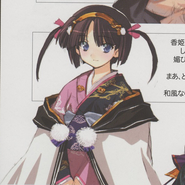 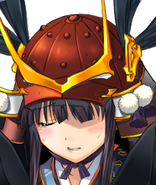 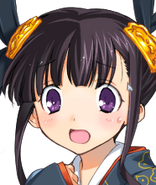