Kobayakawa Chinu is one of the Three Maid Sisters of the Mouri House, being the youngest of Motonari's daughters. While seemingly innocent and delightful from the outside, Chinu is actually a dangerous killer whose specialty is poison. Because of her childish and tricky demeanor, she is often considered to be the most dangerous among the three sisters, which is saying something. It is later revealed that her body had been sealing one of Xavier's apostles, Genbu, all along and she would be killed once it came out.

She makes first appearance in Sengoku Rance during the introduction event of the Mouri House, where she displays her skill and murderous nature by employing poison to slaughter countless troops of the Akashi House. Eventually, her House goes to war with the Oda House, which is under the leadership of the foreigner Rance, and they are defeated. She, along with her sisters and father, are all recruited into the Oda House and join their Army when they were invited by Rance, and among the three sisters, she's the one that likes him the most.

Just like Kiku, Chinu was once married and also divorced right-after as well. Unlike her sisters, Chinu is very fond of sex, and daily spends time fornicating with subordinates or other random men she seduces. She and Rance get along really well because of it, but Rance is annoyed by the fact that she sleeps with other men, ordering her to have sex only with him. Chinu, secretly hiding the fact that she harbors the Apostle Genbu within her, knows that her time is running short and after spending time with Rance grows to like him a lot, and agrees to sleep only with him but on the condition that he would always remember her in exchange, which confuses Rance but obliviously accepts.

Chinu unfortunately meets her tragic end during the rise of the Demon Army, where her body is mutilated upon the release of the Apostle Genbu.

Chinu is a seemingly charming and delightful young girl, being happy and cheerful all the time. However, behind this seemingly endearing girl hides a brutal assassin, who makes use of a wide variety of poisons to kill her opponents. She's surprisingly sadistic and callous, with little sympathy or mercy towards her enemies, and she loves seeing her victims dying slowly. The pain and torment poison brings to her victims is pretty much the only reason why she chooses it as her killing tool of choice. Chinu was also completely fearless, as she was the only one that didn't show the slightest sign of fear to the Apostle sealed inside of her, to the point she perfectly accepted and naturally lived with it despite regularly listening to Genbu's voice urging to come out.

Despite her cold-blooded nature, her bright and jovial attitude is no mask or act, and she's legitimately like that. While she's ruthless and cruel towards her enemies, Chinu is very affectionate and loving towards those she values. She's sweet and warm-hearted, but is aware of her own sadism and even warns those she holds no reason to opposition to that it would be better for them to stay away from her, as she could end up accidentally killing them. Tea parties are one of her hobbies, which ironically contradicts her second hobby, which is poisoning. She has a wide knowledge over many different herbs and its effects or how they can be mixed up to make the most painful and dolorous effects on her victims, regularly spending time wandering around forested areas curiously searching for many different wild herbs.

In addition, what many would describe as a kindhearted and innocent girl in looks, Chinu is actually very lewd and lustful. She's unbelievably fond of sex, to the point she's almost like a female Rance in that regard. Prior to meeting him, she would never set down with a single man and believed them to be like snacks for her. She herself claims to have slept probably with over 300 men, which is quite a number that even Rance was surprised about. Despite this, she's very different to Rance in bed. Instead of being a lascivious and aggressive sex maniac, she's notoriously amorous, liking to spend a sweet time with her partner, as men that she seduced have shown great joy from the experience, referring to her as kind and pure. She was really affectionate with Rance, asking to be embraced by him or resting on his chest with calm and charm.

After she was revived as a zombie, she developed zombie habits, like wanting to eat brains.

Being one of the key figures of the Mouri House, one of the most firm contestants to unify JAPAN during the Sengoku Era of LP0005, Chinu is a very skilled individual. She possesses an incredible Level Cap of 50, with her current Level being 35, and a wide array of versatile Skill Levels. Chinu's trademark and most well-known talent was her ability with poisons, being able to create countless different types of poisons to kill her targets in many different ways. She was also very effective, cunning and tricking when using it, being able to affect even a portion of an army with them and greatly reducing its numbers. She also carried a vast knowledge and experience with medicinal herbs of all kinds, and was also capable of using several medications to take care of her father's fragile health. She was also highly skilled at making contraceptives, and took great pride of her skills, claiming that they were perfect.

Aside from her skill at drug development, she was also a very proficient healer with a high aptitude for Divine Magic, being capable of casting high-level healing spells like "Recovery Rain" with great effect. In the battlefield, when not making use of her poisons, her primal role was that of a supportive unit that would recover her allies from wounds.

Lastly, Chinu was also a very hard-working and competent maid, boasting a Maid Lv1 skill. She was capable of handling domestic chores with ease, although she was arguably the one that contributed the least in the house-work itself, as her role was mainly as her father's nurse, but she still showed great competency for the task and was able of dutifully carrying her responsibility with joy.

Chinu appears along with her family in the first Mouri's introduction event. Just like her sisters, it's only possible to capture her either in battle against the Mouri family after the all-out battle against Oda's main force has occurred (despite the fact that she does not appear in said battle), upon conquering the Mouri family or capturing her after they've made an alliance with Shimazu.

It's possible for Chinu to eliminate all of Oda's commanders just by simply participating in a battle. It's shown as her poisoning the whole army, causing the commanders to retreat, making it impossible to attack/defend. On the brighter side, it will only happened once in one play-through.

Unlike her other sisters, Chinu is not a virgin and is more open toward everybody, that is including Rance, whom she somehow trusted. During one of her events, she asked Rance to never forget her, implying that she is aware of her limited lifespan due to what she has been sealing inside her body this entire time.

In her last appearance, she is shown telling somebody to wait since she has something to tell Rance. Unfortunately, her body explodes when the Demon Army arrives and Genbu is released.

In an unofficial patch (v2.050) to Rance Quest Magnum, Chinu can be revived in a certain quest and join the player's party. She has a zombie-like appearance, and exhibits occasional zombie-like behaviors. Even though it was released by AliceSoft, this may not have been considered canon due to the nature of the patch and the quest in question, until confirmed by her appearance in Rance X.

While visiting Souun, Rance receives a letter from Gigai informing him that on a full-moon day that only happens every few years, he can revive an acquaintance of his if he goes to Yomotsu Hirsaka, a special dungeon that connects to the underworld. Souun assumes it to be Ran and accompanies Rance. Gigai informs the party he can do a special ritual to revive the dead if they collect the body parts of the deceased. While collecting the bodies the party finds a teapot and Teru finds it familiar, hinting that the dead person is Chinu. After collecting the body parts Gigai informs the party they must announce the name of the deceased in order to revive the person; calling the wrong name will make the ritual fail. Rance immediately calls out Chinu's name and she is revived, who happily greets Rance and Teru. She informs the party that after dying her soul was wandering about until Rance called out her name. She is delighted to know Rance remembered their promise and joins his party.

Rance later asks Chinu for sex and she refuses because of her cold zombie-like body. When Rance says he doesn't care and calls Chinu cute anyways, she affirms her love for Rance and allows him to H her.

She is sent to Zeth to fight the demon army. 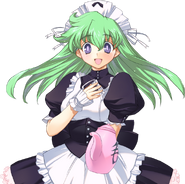