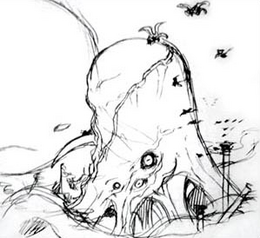 Kkulf Kkulf was the 1st Demon King of the Planner Scenario, the system created to bring destruction and despair to the protagonist race of the continent. As the first member of Planner's new concept of an ultimate evil for the Protagonist Race to fight, it was more of an experiment by the God. Even though its race was known for being unremarkable and generally weak, Kkulf Kkulf was a particularly exceptional Round One, with a strength greater than any other member of its race and a great charisma that allowed it to become the chief of its species, making it an ideal candidate to test the waters for Planner's new system. The result was superb, as Kkulf Kkulf ended up becoming the most powerful living being to ever exist in the continent, and represented a force of such magnitude that managed to keep a warring world against the Dragons for over 2000 years.

At some point during the early period following its transformation the Dragon race was created by Supreme God Roven-Pan, and total war broke out between them. It was a long and devastating battle as the formidable Dragons struggled against Kkulf Kkulf, but the fighting gradually and slowly debilitated it until it was finally slain by the Dragon Avel.

During the events of Rance X: Part 2, Kkulf Kkulf manifests during the final battle when Blood Memories uses past recollections to imitate the fighting style of the previous Demon Kings. Its presence represented an intimidating force for everyone present, but Rance claimed that it only showcased that Blood Memories was getting closer to its defeat, as if it was pulling the trump card that is the strongest Demon King it could only mean that it was driven to a corner. Following its defeat, Blood Memories ran out of options and was left vulnerable, giving Rance the chance to finish it off and destroy it for good.

A gigantic monstrosity that spanned for 4.7 km in length, making even the already big Dragons look like bees in comparison. Kkulf Kkulf was an intimidating and grotesque creature unlike anything else seen in the continent, monster or otherwise. It had a total of 8 eyes, 3 on either side of the main body, and at the tip of one of its tentacles an appendage shaped like a deformed human female. Its body was completely white and resembled a molluscic organism, namely a giant white octopus. The head was covered by an orange transparent layer that was nearly indestructible, protecting Its brain matter floating around underneath it.

Not much is known about Kkulf Kkulf's personality, but it is known to have been the Demon King that Dark Lord Kayblis admired the most, seeing it as the pinnacle of all living creatures and nearly godlike in every way, as well as his greatest inspiration on his quest to become the strongest. Because of the grotesque amount of power it possessed, Kayblis viewed Kkulf Kkulf as though it were on a different level of existence from other organisms, and found it impossible to ever tell what it was thinking. Despite this, Kkulf Kkulf apparently did possess some amount of traceable emotion, as it developed a certain fondness for Kayblis during their time together; a fact that Kayblis was never aware of. Since Kkulf Kkulf waged war against Dragons for thousands of years and the Demon King's blood was designed to fill it with hate and bloodlust towards the Protagonist Race, it is presumed that it held an intense hatred for dragons.

Without a doubt the most powerful living being to ever live in the continent, with its position as such never put into question. Kkulf Kkulf's might towered over anything else in the world's history, making even other Demon Kings pale in comparison. Its power was nearly on the same level as that of a 1st Class God like ALICE or Quelplan, divine entities with reality-warping powers. It ascended before the very concept of an Invincibility field had been thought up and it didn't even need such a gimmick. It would use its tentacles to extract blood from creatures for miles around, puncturing and absorbing any living creature within its range. On top of that, Kkulf Kkulf boasted incredible regeneration abilities, if one of its tentacles were to be severed it would regrow very quickly.

Kkulf Kkulf's titanic strength allowed it to single-handedly wage war for 2000 years against the entire Dragon race, a species known for its unrivaled fighting power.

The projection of Kkulf Kkulf created by Blood Memories in Rance X.
Add a photo to this gallery

Retrieved from "https://alicesoft.fandom.com/wiki/Kkulf_Kkulf?oldid=119890"
Community content is available under CC-BY-SA unless otherwise noted.