Kisara Copley was a notoriously talented adventurer from the Free Cities Alliance that took well-paid jobs of any kind. In the past, her parents ran a successful business on the Free Cities but through many misfortunes and deceptions from others, their company was soon left bankrupted and accumulated a massive debt over the years, reaching the absurd value of 4,000,000 GOLD. Filled with despair, her parents ended up hanging themselves and the debt was passed to their daughters. As a consequence for this, the creditors took Kisara's younger sister Rebecca Copley as payment, resulting in her becoming a Fukuman prostitute working for Pluepet. In order to pay the debt and free her sister from slavery, Kisara became an adventurer as means to acquire the financial support. However, despite being a fairly talented individual with solid fighting ability and skilled for adventuring, she found herself regularly deceived and tricked by those she trusted several times, resulting in her never being able to gather the money needed to pay the debt.

At some point not long prior to the events of the Rance 4.x games she met the adventurer Bird Lithfie. Despite her uneasiness in trusting people due to the many deceptions she suffered in the past, Bird was able to win Kisara's heart and trust after he offered his help to make the money she needs to pay her debt, and the two formed a party for some time. An opportunity arose when the Happiness Pharmaceutical Company made a petition for a huge amount to exterminate a group of Monster that'd appeared on a dungeon below their offices, and the two signed up immediately. With the two working together they were able to steadily advance through the dungeon efficiently. They eventually met with the adventurer Rance that'd also applied for the job, who immediately expressed interest in Rebecca and tried to badmouth Bird in an effort to push him away from Kisara. She discredited anything he said however, and chose to remain with Bird.

While they were able to continue advancing through the dungeon, their progress was eventually cut off after being trapped due to a collapse set by Arnie Rolento, who was manipulating from behind the scenes to make sure no-one was able to complete the job. Trapped in an inescapable pit with no resources they soon lost hope for survival when Bird suddenly confessed to her, expressing that he wanted to spend their final moments together. Kisara accepted his feelings and the two embraced each other. Their time together was short-lived however, as Rance managed to sneak to their location from a secret path and knocked them out immediately with the help of Athena 2.0. He then proceeded to employ what he named the "Operation: Pervert Bird!", where he blindfolded Kisara and used Athena's special ability to imitate others voices. By doing this he was able to take Bird's place and convinced her that blindfolded sex was his fetish. He then spent hours having extremely rough sex with Kisara, who utterly hated the experience and quickly started to dislike Bird as a result. When he was done and she was put to sleep again, Rance abandoned the area while leaving an open passage for them to escape. Once she woke up, she immediately left behind the still unconscious Bird.

Later on, she will reappear after Rance managed to successfully complete the mission and get the reward himself, where she's being pressured by Pluepet for her unpaid debt. Rance will intervene and use the reward to pay a portion of it, convincing a reluctant Pluepet to leave. She then expresses her gratitude and her disappointment with Bird's "true character", which Rance reaffirms by reminding her how he warned her about him. As Rance is about to leave to complete a new mission to defeat the Angel Army, Kisara decides to go with him as she wants to repay him. Over the course of their adventure, Kisara once again starts developing strong romantic feelings for her partner, in this case Rance, and believes him to be the only person she can truly trust. Once their mission is over, they part for the time being.

Kisara makes another appearance during the events of Rance Quest, four years after the previous events. Despite her efforts to pay her debt, Kisara was eventually incapable of paying Pluepet and was eventually forced to become a Fukuman prostitute as well, forming a duet to service men with her sister. Just like her however, she was implanted with a mind-controlling device that prevents her from acting out of her own free will. They both wear a golden plate on their foreheads that turns them into nothing but faithful slaves without emotion, reducing them to sexual dolls. Through Pluepet, Rance can either buy the services of their skills as Fukuman for 30,000 GOLD to increase his attributes, or he will express intention of buying them entirely instead. Pluepet agrees to sell them to Rance for 8,000,000 GOLD, a substantially larger value than their original debt that increased over time through interest. Depending on the player's actions, the player can either pay the full price or reduce it to up to 5,000,000 with the help of Copandon Dott. Canonically, Rance buys them and they both start residing on the Rance Castle, with Kisara expressing an immense gratitude for Rance after their mind-controlling devices are removed, being able to finally live a free life along with her sister under Rance's shelter.

A flagrantly attractive woman, Kisara boasts a slender, athletic and mature body combined with an appealing face and a distinctive long purple hair, as well as eyes of the same purple color. She's well regarded for her beauty, instantly catching the attention of many men for her good looks. Her outfit consists of a formal suit that, while it isn't particularly feminine and exposes none of her skin, it further emphasizes her curvaceous figure.

In terms of personality, Kisara is a hard-working and dedicated person that has worked for years to pay the debt that was unfairly place on her by her parents. She longed to be able to pay it and optimistically became an adventurer hoping to be able to free her sister from slavery. However, her optimistic mindset turns her into an extremely naive and gullible person that is constantly tricked again and again. She has a tendency to place her complete trust in those that help her, and quickly believes them to be the ideal benefactor she's been needing for a long time, only to always be disappointed in the end. Once she finds someone she believes in, she's extremely loyal and supportive, and will never doubt them in the slightest until she's directly hurt by them. She overall tends to believe that people are inherently good, and wants to believe that nobody is naturally evil. She's also someone that is very motivated to repay those that helped her in the past, and will devote all her self in doing so. She was a chaste prior to the events of Rance 4.1 where her virginity was taken by Rance supplanting Bird. Because of the extremely rough experience she faced with who she thinks was Bird, she came to loathe him as a result, as well as developing a trauma over being blindfolded at all ever since.

After Rance helped her with paying a portion of the debt, her feelings of responsibility led her to accompany Rance during the events of Rance 4.2, and she quickly fell in love with her benefactor, never forgetting the only man that she could truly place her trust on. She never found out about how her incident with Bird was actually Rance, and she will likely never will.

Due to growing up in poverty, Kisara is used to terrible living conditions and has developed some weird habits because of it. For example, when she moved into Rance Castle, she opted to sleep in a cardboard box despite Rance giving her more favor conditions to sleep in.

A skilled woman, Kisara was quite talented as an adventurer. While her Skill Levels were never revealed, she was shown to be quite effective at eradicating Monsters in battle, and was able to successfully complete many missions despite never receiving any formal training. She has a fairly notable Level Cap of 38, granting her a higher potential than the average adventurer. In battle, her fighting style revolved around employing a series of cards capable of casting Elemental Magic, which she usually threw at her enemies on high numbers. This an unseen style with its origins unknown, but its performance is quite impressive, being able to defeat sturdy enemies smoothly. Rance noted how she was the one doing most of the work in battle during her time with Bird. On the other hand, her physical fitness is subpar as she doesn't wear any protective gear due to her lack of physical strength. This makes her similar to a squishy mage in battle, and relies on her allies protecting her from enemies as a result.

Despite all these abilities, her naivete leads her profession to be largely unproductive, as she always ends up losing more than she gains due to overly trusting others. After becoming a Fukuman, she also gained the ability to absorb the negative feelings of those she fornicates with, allowing them to achieve an ebullient state as well as reducing their Soul Pollution.

Kisara in battle in Rance 4.2. 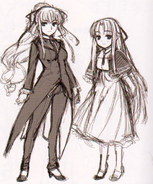