Kikkawa Kiku is one of the Three Maid Sisters of the Mouri House, being the second born of Motonari's daughters. Her role in the family is as a cooking-maid, and she is responsible for monitoring Motonari's foods due to his health issue. It's stated that she was married once, but she divorced because of several reasons, with one of them being that her husband was afraid of her eyes. Due to that marriage and her father's influence, she is only interested with strong men, and will only serve under someone who is able to defeat her in one-on-one match.

Kiku appears along with her family in the first Mouri's introduction event in the large-scale battle against the Akashi House, where she became one of the key figures that wildly changed the course of the battle and slaughtered countless enemy soldiers. Later on, war breaks out between her House and the Oda House led by Rance, who's attempting to unify the country. Just like her sisters, it's only possible to capture her either in battle against the Mouri family or after the all-out battle against Oda's main force has occurred. When captured, Rance will attempt to recruit her but she refuses saying that she would only serve under a man stronger than her, which leads Rance to boast about being the strongest, so the two have a duel to convince Kiku to join in which Rance comes out victorious when he managed to knock her out with a punch on the stomach.

After winning, Rance takes the still unconcious Kiku with him and starts "inspecting" her, removing her underwear and playing with her genitals, finding out that she's a virgin. He gets aroused and tries to have sex with her while she's still asleep but she wakes up right before he got the chance, much to her anger.

Rance, claims that he's the strongest in the world and that she should let him have sex with her, statement that is laughed at by Kiku, who believes her father Motonari is the world's strongest man. The two make a bet that, if he was able to defeat Motonari and prove himself as stronger than her father, then she would be let him take her virginity, which she accepts as she's confident in her father's victory. After this, if the player manages to defeat Motonari in the solo battle, there's an event where, despite winning the bet, Rance is initially unable to convince her to give him her virginity and only earns a titjob from her, though he manages to persuade her later on.

After the war is over and the Mouri House is annexed to the Oda House, Kiku takes part as an active commander assisting in the unification of JAPAN and, later on, in the battle against Xavier and his Demon Army. There's also an event in which she's trying to teach Kou how to make proper dango, but the result became creepier than what she initially expected. Seeing how atrocious the killer dango is, Kiku assumes that Kou may have a natural talent to be a master assassin, with her assassination weapon being her killer dango, in which Kou obviously refuses. She's mentioned in the Sengoku Rance Epilogue, where she prepared dango along with Kawanoe Mine for Kou and many of her companions to enjoy.

Kiku is an attractive young woman with a short green blue hair and that is always wearing a Maid outfit. Of the three sisters, she's the one with the most developed and voluptuous body, boasting a big bust, large hips and long legs that grant her a higher height, which usually makes her look like the eldest. She's noted for her truculent and wild eyes, and she claimed that her former husband was so scared of her eyes that he would get impotent in bed. Apparently, agitation is a common occurrence as she was surprised when Rance claimed that he found her cute regardless.

Her father, Mouri Motonari, is a man that lives for battle and wanted to raise his off-spring as warriors, regardless of their gender, and they all grew as violent battle maniacs with their hands stained in blood from an early age. However, their mother believed that they also had to learn to be more lady-like and, when they weren't in the battlefield with their father, they were usually being instructed by their mother. Their mother is described as a feminine woman that worked as a Motonari's Maid prior to falling in love with him, so the three sisters were also raised as maids and forced to wear as such all the time, even when fighting. Just like her sisters, she loves and respects her father, she always believe that Motonari is the strongest man alive, with or without the curse. She takes care of him dairly with love and care, and highly looks up to him. While he might not look like it due to his violent nature, Motonari is a caring father that prioritizes his daughters happiness over anything, as he was the one that encouraged Kiku and Chinu to divorce after they got married for the sake of establishing better relations for the Mouri House when he noticed they were unsatisfied with their husbands.

Like her other sisters, Kiku is a very violent and vicious person that loves battle and war. She's merciless and savage, annihilating her enemies with no compassion and destroying anyone who goes against her family. She respects strong fighters, and believes that she would only work for someone stronger than her. Aside from her battling side, on a daily life, she's an easy-going and carefree that enjoys her job as a cook. She's proved to be amiable enough to have the initiative to help others to improve their own skills, as she happily agreed to aid Kou in her effort to improve her cooking skills. Contrary to what many would expect, she's an extremely prudish person that easily panics with matters related to sexuality, which is the main reason why she strongly rejected Rance's requests for sex even after she had promised to sleep with him if he defeated her father. When she's in such situation, her personality wildly changes and becomes a lot more timid and sheepish, to the point she claims that she would rather be naked on the battlefield than in the bed with someone else, since at least she could fix that immediately situation by just killing everyone.

As one of the top members of the Mouri House, one of the most solid contendants to unify JAPAN, Kiku is a highly experienced and talented warrior that has been trained from an early age by her father. She's been in the battlefield for many years and shows no fear or hesitation, frontally lunching herself to the frontlines to take down as many enemies as possible. While her Level Cap of 42 is the lowest among the Mouri Sisters, she's by no means the weakest, and her current Level is 35.

A very skilled fighter with a Ninja Lv1 skill, she's a very agile fighter with a very balanced and steady fighting style that has been honed over the years. She's not trained in the Ninja arts, but her tecniques are similar to the ones they employ and is an expert assassin as well. When fighting, she's extremely aggressive and attacks without the slightest mercy or honor, attacking unprepared enemies or while they have their guard down with no shame. Even when sparring or having a regular duel, her attacks are precise, deadly and always aimed to killing her opponent by striking them on vital spots. Her fighting style is also strange and unconventional, wielding a frying pan that has a chain and a blade attached to it. She uses the chain to attack her enemies from a distance, and she's shown great proficiency with it, as she was also able to use it to limit the movements of other experienced fighters like Rance. She also sometimes use the frying pan as a shield, or to hit her enemis from an unpredictable angle. The weapon is as unique as complex, and allows her to catch her enemies by surprise due to how unorthodox and unexpected it is.

Aside from her fighting skills, Kiku is also a highly capable maid that boasts a Maid Lv1 skill. Her main talent is cooking thanks to the training she received from her mother, and is capable of preparing a wide variety of delicious and nutritious meals with expertise. She also has a good eye for noticing others talent, as she was able to realize Kou's hidden potential for poisoning before anyone else when she attempted to help her improve her cooking. 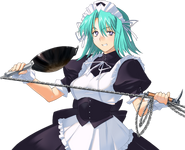