Before this section is completed, you can also check out Kichikuou Rance:Tutorial/Raw for an old IRC chat log covering this topic.

Actions available on your turn[]

This is a turn-based game. Each turn is one week in game time. The player may take several actions in one turn, with the ultimate goal of conquering the continent.

The actions available each week are: 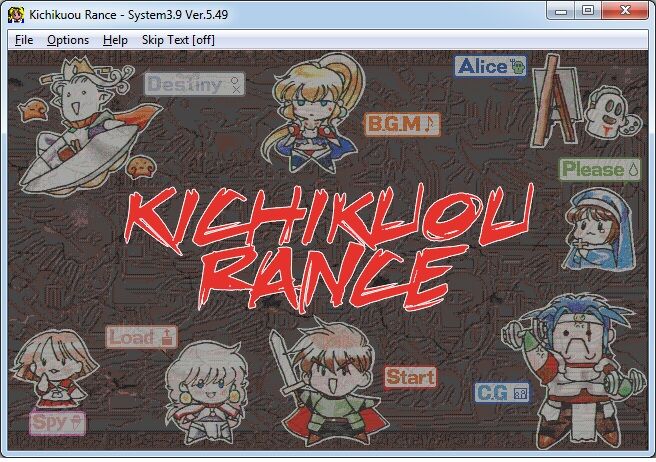 When you first start the game, there will only be 3 menu item: Load, Start and Alice.

You can unlock the other menu options "BGM", "Alice", "Destiny" and "CG" by getting any of the 4 good endings in this game:

In addition, once you've done this, there's a:

Levying is important not only for getting money from high economy cities, but also for recruiting girls to the Harem, thus unlocking more CGs and Rance's special room.

The CGs for Rance's "special room" requires you to accumulate 5, 10, and 15 girls respectively, via levying. Although the walkthrough on this Wiki didn't explicitly mention levying for this purpose, don't forget to do this throughout the game. Otherwise you may have difficulties meeting the required quota at endgame.

Note, however that you can only do 1 levy or city action per turn. You'll often want to visit a building in Leazas, such as for Maria's events, or do a special action in another city, like to take over the AL church, to advance the story.

At the beginning of battle, the player selects up to 4 generals. The first two troops are in the frontline, while the 3rd and 4th troops are backline. Backline troops can only use (and conversely hit by) arrows, magic, or special attacks. The general status screen shows whether each general's troops are frontline, backline, or are adept at both.

When a frontline troop is defeated, the troops under it moves up. Because ranged troops tend to have weaker defenses, a common player strategy is to defeat one of the two melee groups first, so the ranged group 3 moves up to the frontline, then the player can easily pound on the weak ranged group.

Each battle consist of 5 rounds. If after 5 rounds neither side is eliminated, the defending side is considered the victor. During each round, when it's your general's time to make a move, the general's name will be in yellow. Select the enemy to have the active general's troops do the default attack. If you right click on the general, more options are available. The options are typically: Normal Attack (if the default attack is magical or ranged), Defend, Auto-Attack, Auto-Defend, and Retreat.

Every battle has a battle field size, the plains size is generally 5000, city field sizes differ. The field size is the maximum number of troops that can fight at once, E.G. A field size of 500 means that only 500 out of 1000 troops may attack. If the unit size is larger, the commander will not attack and will also not be displayed on the battlefield when the unit attacks. When defending a city, the field size will slowly increase (seems to be by 10%) after every battle (this does not apply to the enemy defending their cities against you). If the unit size is smaller than the field size, attacks will have a chance of hitting the commander in addition to the unit.

If a general is set to auto-attack or auto-defend, the general will automically attack/defend for the next several rounds. To cancel the auto-mode, you have to wait until another active general's turn, then right-click on the auto general to pick the option that cancels automode. If all of your generals are on auto, there is no way to cancel it.

Experience from battles is not reduced for sending additional troops, so always send 4 units if possible to gain the most experience. Experience gained seems to differ based on how many enemy units are defeated and how strong the enemies are. Winning battles vs Camilla gives much more xp than vs Lei for example.

Some characters have special skills that only they can use. This can be seen in the commander menu in the description.

To use a special skill in battle, you have to select the Wait option and in the next turn a new attack option will appear allowing you to use the special skill. Many players don't realize this function since they think the wait option is entirely useless (it would have been better if it was named something like "Charge"). Most of the skills are focused on dealing damage to the main commander. A good use of this is to take down commanders with huge amounts of troops. For example if you face an enemy with 2000 troops but only 5 Hp the best strategy is to use Rance's and Rick's special attack and kill him in two turns, rather than try to take down all his troops first. Note though that commanders tend to heal some hp between turns.

Size of the Battlefield[]

You will often get a choice to fight inside the cities or in a field. The size (city = small, field = big) determines the amount of troops that can be deployed.

That means that if you are in a location with a space of 500 units and deploy a commander with 1000 troops like Rick, only 500 hundred of his troops will actually attack. He will still have 1000 troops but his attacks and counter-attacks damage will be calculated as if it was 500 instead. The same applies to the enemies obviously. Note that the commanders are always counted as the last unit so they will never take any HP damage from normal attacks until their troop count falls below the current battle size.

The cities usually gives you an advantage in combat but are smaller areas that the outskirts, making it better for commanders with lower troops than your opponents.

Also, it's a common problem the fact that many try to attack a Demon with Rance or Kentarou with normal attacks and notice that they won't deal any damage, despite the fact that they have equipped the Demon killing blades that work against demons. When this happens the problem is that if the amount of troops the character has surpasses that of the battlefield, all his troops will attack the demon but not the commander, making the attack deal 0 damage.

To leave this more clear. If you are using Rance with 1000 troops and you are aiming to kill a demon, you need to fight in an area size larger then 1000 so Rance is able to hit him directly. Otherwise you will need to wait until you lose some troops if the location is smaller.

Dungeons usually look like caves, holes or other unique features on the world map. For a full list, see Kichikuou Rance:Locations.

You need to have a city adjacent to the dungeon to be able to explore it.

In dungeons you pick a character and start descending floors. Most commanders take penalties when exploring dungeons. But some have bonuses. The best dungeon explorers are typically Rance, Leila, Julia (improved), Patton, Arlcoate, both girls from the girl's officer academy, Kentarou and mercenaries hired from Pluepet, Due to the small field size in dungeons, very strong unit commanders with small unit sizes also work well in dungeons, like the Kaijuu Prince.

Dungeons have a max field size similar to battles and you can ascend/descend floors as you like. Each floor has a random chance of encountering a random enemy (reduced by equipping the Safety Bonsai) and some floors have a set enemy. Treasures are located on set floors (tyically the bottom floor of a dungeon) and bringing Merim may cause her to give a random stat boost to the exploring unit.

You cannot send Miki or demons into dungeons. You cannot retreat in battles in dungeons, so make sure to retreat before a battle if the unit size drops too low.

There are some places you can go to that are neither dungeons nor cities, like Ho Raga's tower, and serve as events for other purposes but still count as visiting a dungeon for that week.

There's a tower at the top of the map where Ho-Laga lives. You can visit his tower to ask him about many different things and also serve to unlock a few events.

There's many points in which visiting Ho-Laga gets you the answer of what you are supposed to do. Getting a way to pierce the field that protects the tower fields in Zeth, how to cancel Devil contracts, about Kesselrink's weakness, long etc. Ho Laga is almost your in-game walktrough in many points of the game.