Surprisingly, she doesn't appear in this route, thus making all of her appearances so far non-canon.

With Kenshin and Xavier, she is the third possessor of an Emperor's treasure, as well as one of the three active participants of the Emperor Race. Since the rules of the game determine that one gains 20 points plus all the points the opponent had accumulated, she does not bother chasing after the other players, but instead is content to wait until someone amasses enough points so that his defeat would lead to an instant win. In the meantime, since he is the one contestant she cannot kill despite her abilities, she slows down Xavier's progress by using her doubles to distract him and send him on wild goose chases. Eventually, if Kenshin is close to victory without managing to finish, Keikoku will poison her, thus leading to her winning the Emperor Race and causing a Game Over.

In Isoroku's Route, with Oda lacking a true heir, Oda Nobunaga's will dictates that Rance is "burdened" with the task of impregnating at least one of the many japanese women that come to him, so that the Oda house can have a successor once more. When she hears of this, Keikoku leaps on the opportunity and engineers a ploy to control the powerful nation. As she initially arrives, she shows herself unwilling to immediately sleep with Rance, claiming she is unwilling to discard her pride, which only serves to make Rance fixate on her (in the meantime, a ninja in Keikoku's employ, Gakuha, sleeps with him instead). Eventually however, she declares that they shall finally do it, but that she wants to use an incense burner, claiming it to be a romantic charm and aphrodisiac. However, it turns out to be a sleeping agent, and in the morning Keikoku insists that they spent a wonderful night together despite Rance having no recollection. Eventually, she claims that she is pregnant with his child, much to 3G's initial delight and Rance's shock, as the contraception spell should have made this impossible. Of course, though she is pregnant, the father is her lover, another foreigner called Steve, now posing as her personal doctor. As Keikoku torments the Oda house with her newfound authority, Isoroku discovers some of the treachery while accidentally eavesdropping. While Keikoku pressures her into keeping quiet, Suzume discovers the truth from her anyway. After her child's birth, Keikoku starts planning the next stage of her plan: killing Rance and declaring herself the Queen Mother, by slowly poisoning his drinks. However, Suzume and Isoroku foil her plans, and after a battle where she is shot and Steve dies, she is forced to flee. She is eventually recruited into the Demon army, Xavier recognizing her power, and joins the assault on the Oda house on the side of the monsters.

With Xavier sealed once more, Keikoku serves as the main antagonist. As Houjou Sooun is slowly dying following his battle with the fierce Ogre of Mamoshi Oil Field, Keikoku comes to attend to him as a doctor. With her skills in pharmaceutics, she succeeds in healing him over the following weeks, however this is only secondary to her true goal: slowly enslaving Houjou Sooun's mind with her drugs. As he grows more distant, Ran becomes more and more suspicious of Keikoku, though Rance dismisses her concerns due to him wanting to bed her. Eventually, Keikoku disappears with Houjou and starts opening hellgates around the country, releasing an onslaught of Onis. When Rance and Ran manage to close the hellgates off one by one, she forces Houjou to release a particularly fearsome ogre from his prison. Though she proves successful, its first act of freedom is to bisect her, with only her odd powers keeping her alive. Though Rance defeats the ogre, Keikoku escapes once more.

One of the commanders of the Demon Army. Exceptional warrior type. 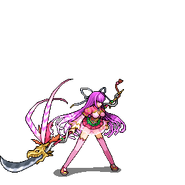