Kaybwan is the Apostle of the most powerful Dark Lord Kayblis. However, she herself is not quite so fearsome. She's slow-minded, laid-back and very incompetent, often messing or down-right forgetting the tasks given to her, Kayblis is always annoyed by her failures.

She fears Kayblis, who she calls "Mr Lis", and usually runs or hides from him if given the chance. She's pretty dumb and lazy, but she's endearing and adorable in her own way, not at all like the apostle of a Dark Lord would be.

She used to be an insect resembling a real life dog, and has many behaviour traits typical of dogs as well (except unconditional loyalty for their master apparently). She lives in the Blue House in the Monster Realm, a very cartoonish and small house.

Despite her incompetence, she has a decently big platoon of monsters under her command that are very loyal to her. Most of these monsters are actually fans of her and love her dearly, following all her orders no matter how absurd. She fights wielding a small sword.

Kaybwan and Kaybnyan's designs for Rance X shown in a development blog. 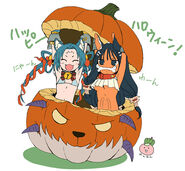