Karin is a girl who greatly resembles Shea, the princess that Shura was in love with centries ago. When she was little, she moved away from the town above the Lid of the Kettle of Hell right after the tragic death of her parents. Then when Arima Kouyou became her foster father, she moved back to her hometown. Karin's best friend is Ninomiya Asako, whom Karin knew before her parents' death, and whom Karin immediately reunited with upon moving back.

She is an extremely gentle and kind-hearted person. When she first found out about her resemblance to Shea, Karin wondered if she might have been Shea reincarnation. But after learning the horrid way Shea was consumed by Deirdre, down to the very soul, such that Shea could not have reincarnated, Karin became oversensative to Shura's pain, and feared that her very presence was a cruel reminder to Shura of Shea's death.

After the death of her parents she was sent to her loving grandfather, but he sadly passed away after just 2 years. After that she got passed around between distant relatives and foster families who didn't care much for her or just abused her.
This led her to generally spend the day away from home, which is when she met Arima Kouyou who tried to help her at the family before him.
This final family was the worst, with the man trying to rape her. Something Arima noticed as he was using his magic to eavesdrop as he suspected something was up. He was enraged and cursed the man to see everything as if it was otherworldly which made him go insane, with the pull of the church he then adopted her.

She got kidnapped by Fenrir to draw out Shura. She actually had a spell put on her which would allow Fenrir to take over her body when she dies. This worked for a bit, but Karin then took back control and promptly stabbed herself in the throat.
Her soul got prematurely taken by Deirdre to hell. Shura followed her and after some twist and turns he took her back, but not before she saw the events of Shea's death.

Her parents which she thought had died during some kind of accident were actually murdered by Duendy, including her friend Asako. That Duendy then took the form of her and got sealed so as to not blow her cover and strike at the right time.

It is revealed during the events with Kudorusuchisu that she has angelic powers. These powers allow her to protect others, but not herself. With those powers she finally has a way to help Shura, she even goes on to assist him in the final fight against Deirdre.
The reason she has these angelic powers is because she was a half reincarnation of Shea with the other half being the soul of an angel. This way she could be reincarnated.

She is the mother of Katsuragi Kira. 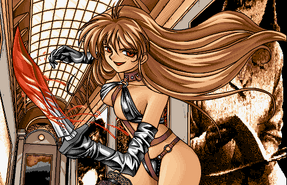