AliceSoftWiki
Register
Don't have an account?
Sign In
Advertisement
in: Articles with No Spoilers, Articles needing a Quote, Characters,
and 3 more

Kasumi K. Kasumi is Maria Custard's assistant and student. She usually appears in scenes where Maria is working on Tulip. Like her teacher she's clumsy but very loyal and faithful. She's very shy and innocent, and brushes aside Rance's advancements on her. She's the Deputy Director of the Maria Factory and is in charge of the management and administrative affairs. Her clothes and looks are similar to Maria but has a short black hair instead.

She has a Lv1 skill in Mechanics, which means she's quite skilled. She's helped Maria in the creation of the Tulips to make her battalion and has also aided her in all her constructions in the Tulip Series from the #3 onwards.

She can also lead a squad conformed by people wielding Tulips and seems to be fairly proficient with Maria's invention, although not quite in the same level as Maria. In Sengoku Rance, it is possible to recruit her by asking Maria for reinforcements.

She has been confirmed to appear in Rance X, making her playable debut in this game. 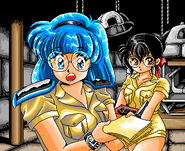 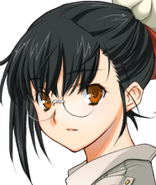