Kaoru Quincy Kagura is an attendant of King Gandhi, and was born in the family of Quincy who traditionally have served as bodyguards of the Kings of Zeth. Gandhi calls her Kaku-san, based on the novel of Mito. She is devoted to Gandhi, almost to the point of worshiping him. She loves him more than anyone, and is completely loyal to him. She will go anywhere he goes, and would obey any orders given by him.

Kaoru graduated school in Zeth at the age of 10, and went to JAPAN as an exchange student. She studied an ancient styled Jujutsu named Tenzen Bushinryuu under Tenjin Kagura.

Upon mastering the art, she was given the name of Kagura. She performs spy duties, but has no Ninja skill.

During the events of Rance X, Kaoru, along with her companion Wichita, join King Gandhi in his guerrilla opposition to the Monster Realm's invasion of Zeth. Due to their skill, the trio fight successfully against many Monster forces of much greater number, but focus their goal on defeating Dark Lord Medusa. Due to the branching nature of the story, there are several possible outcomes for Kaoru and her ultimate fate is never clearly stated. However, in Rance X: Part 2 it is heavily implied that Kaoru, Wichita, and King Gandhi were unsuccessful in opposing Medusa and were violently killed by her (with Kaoru and Wichita receiving Medusa's usual violation beforehand).

Calm and collective, Kaoru is a very mature woman. Her demeanor is gentle, yet she holds her beliefs strongly.

Despite her young age, she is a smart woman that can make appropriate decisions in a calm manner. She easily handles Rance's advancements, tells him to give her 10 years to ponder. However, when she observes Rance's naughty behavior, she imagines how Gandhi was like when he was young, and feels fondly of him.

Kaoru is a skilled martial artist, with a Lv 1 Jujitsu skill and a level cap of 38. She is a master of Jujutsu, and easily threw Rance when he tried to force himself on her.

She is also a fairly good Healer, with having a Divine Magic Lv. 1 Skill. 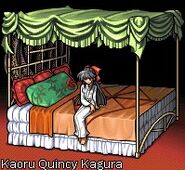 Kaoru's appearance in the Harem Master Trading Card Game.
Add a photo to this gallery