The Kaminagahime is a monster that belongs to the high-tiers in the class of Gal Monsters. They are noted for their absurdly long blue hair, which they are capable of moving at will with little restrictions. Thanks to this ability, a Kaminagahime can make use of her hair for countless things in her life, even for fighting. They can use it to restrain their enemies or to hit them from multiple angles, as her hair is able to reach longer distances than any melee weapon. While they might not look like it, they make devastating enemies since they are capable of performing outstanding feats with their hair, and their attacks deal incredibly high physical damage. It is also extremely durable, allowing them to use to protect themselves from attacks from many directions and come out unharmed, even against magical attacks. They can also cast some rudimentary magic spells but, when compared to their main talent, their magic prowess is rather unimpressive.

They are extremely calm Monsters, almost emotionless infact, as most of the time they are only seen making very subtle expressions and rarely change the serious look on their faces. They are rather quite and hushed, but also surprisingly playful since they like to play around with their hair by making it spin around like a propeller, or doing other such jolly displays. Their hair is very precious for them and they make sure to always keep it in top condition by taking care of it daily.

They are very attractive, even among Gal Monsters, boasting an exquisite figure with a big bust and long legs, coupled with their incomparably beautiful hair. They are usually seen wearing a short orange kimono, sometimes couples with thigh-high white socks. They also have a distinctive red mark on their forehead, which combines with their glowing red eyes.

Kaminagahime in battle in Dungeons & Dolls. 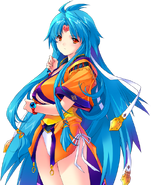 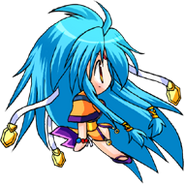 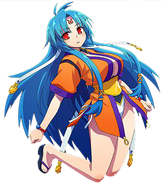