The Kamikaze is a Monster that belongs to the class of Gal Monsters, being among the strongest of the most common and regular types of Gal Monsters found in The Continent.

They all have a long green hair and wear what closely resembles JAPANese fashion, with an alterante colored kimono. They sport a yellow shirt, a long blue skirt that extends past the waist, rice straw sandals and a single protective plate on their right breast. They also wear a distinctive headband on their foreheads, usually either yellow or red, and they tie their hair in a long ponytail. They are usually serious and use an arcaic style of speaking, similar to that of a samurai. They are prideful and temperamental monsters but, while they might not look like it, they have pretty nasty personalities as they enjoy bullying and looking down those weaker than themselves.

In combat, Kamikazes are expert fighters that have fully mastered the art of archery. With a naturally high affinity for the element of Wind, they are capable of swiftly shooting down enemies from long distances and empowering their arrows' strength with wind magic, increasing its speed and sheer power. They have high accuracy and deal obscenely high damage, being among the strongest Gal Monsters in the world.

There is another version of these called "Storm Kamikaze", who are described as individuals with an unshakeable spirit that live for war. They are even more powerful than the regular Kamikazes and the arrows they shoot are imbued with a tremendously powerful wind magic that destroys everything in its path, which earned them the name of "Storm".

A Kamikaze in battle in Toushin Toshi 2. 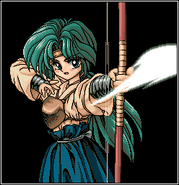 A Kamikaze in battle in Rance IV.

A Kamikaze in battle in Dungeons & Dolls. 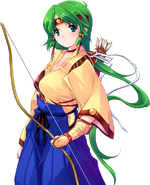 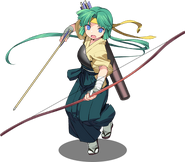 A Kamikaze in battle in Rance 03. 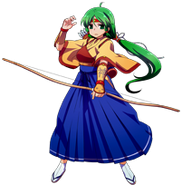