AliceSoftWiki
Register
Don't have an account?
Sign In
Advertisement
in: Articles with Major Spoilers, Characters, Female characters,
and 5 more

Kakusui is the former personal Ninja of Gumo Danjou and the leader of the Silver Eye Sect following his death. She serves as the main antagonist of the Sengoku Rance spin off game Three for the Slash! Thrust! Burn!.

Prior to joining the Silver Eye Sect, Kakusui was a low-ranking ninja of a certain clan. While a hard worker, she lacked innate talent in the art of ninjutsu and was unable to improve her skills even after constant training. Her weakness caused her to develop a complex about her self-worth and grow into a very negative and pessimistic person.

At some point in time, Kakusui was approached by the warlord Gumo Danjou, who asked her to serve under him as a ninja of the Silver Eye Sect. Kakusui accepted immediately, believing her skills to have been recognized for this first time ever, and instantly became incredibly loyal to Danjou. Filled with a newfound sense of purpose and drive, she worked even harder to improve herself for the sake of supporting her new lord. To compensate for her weakness, Kakusui developed a unique fighting style known as the Crane Wing Blade, which incorporated wielding a hidden blade between her toes to catch her opponents off-guard. This technique vastly improved her performance as a ninja and allowed her to achieve a high standing within the group, serving as Danjou's right hand and assassination specialist.

In the year LP0005, a secret meeting between several members of the Silver Eye Sect near the shores of Lake Biwa was intercepted by the Kunoichi Suzume, who had happened to have been fishing nearby. Recognizing the group's potential threat to the Iga Clan, Suzume took immediate action and assassinated everyone present, effectively destroying the Silver Eye Sect before it could begin any formal operations. Kakusui was spared from the slaughter, having been away at a Birdman rally at the time when it occurred, and vowed to take revenge on Suzume and achieve her fallen master's ambitions in his place.

As second-in-command of the Silver Eye Sect, Kakusui was appointed leader by the remaining members, and the group began working in secret to prepare its revenge against the Iga clan. Setting up a base in the former headquarters of Momotan, the founder of ninjutsu, and taking out several loans from the merchant Pluepet, the Sect regained a portion of its lost strength and began operating again.

During the events of Three for the Slash! Thrust! Burn!, Kakusui put her plan to take revenge on Iga into action. Believing herself to be incapable of defeating the ninja of Iga on her own, she aimed to first assassinate Kentou Kanami, a foreign ninja of middling skill who had been training under Iga's leader Inukai at the time, in order to take the legendary Decapitation Blade from her possession and increase her power. When Kakusui infiltrated Iga, she found Kanami seemingly already dead and took the Decapitation Blade from her effortlessly. In actuality, Kanami was playing dead as part of her ninja training, and incorrectly assumed that Kakusui was Inukai, causing her to put forth no resistance. Before she could escape, however, Kakusui was intercepted by Suzume, who quickly overpowered her in a fight. While she managed to escape with her life, Kakusui had alerted Iga to the Silver Eye Sect's reactivation, causing Inukai to send Suzume and Kanami to Momotan's Fortress to take back the Decapitation Blade and crush the organization once and for all.

After returning to her hideout, Kakusui became lost in the elaborate layout of the fortress, and discovered that Suzume and Kanami, aided by the warrior princess Tokugawa Sen, had already made it to her room long before her. She then attempted to fight the trio but was eventually defeated. In a last ditch effort to kill Suzume, Kakusui revealed that she had lined the fortress' walls with hundreds of Puchi Hanny, detonating the building in a suicide attack. The effort failed on all fronts, with both Suzume and Kakusui herself surviving the explosion. While Kakusui immediately began planning her next revenge attempt, she was quickly cornered by Pluepet and forced to sell herself as a slave to him to pay off the debt she had racked up during her previous scheme. After becoming Pluepet's slave, Kakusui was forced to take part in several erotic gravure photoshoots across JAPAN, with many incorporating revealing and humiliating costumes for her to wear.

Kakusui is a young woman with pale skin and long black hair kept in a large pony tail. Her red eyes sport dark circles around them, giving her a somewhat rough appearance. Kakusui's clothing consists of a sleeveless black dogi and a long, tattered cloak. She also wears a single red stocking on her left leg, which is used to hold short swords. When on the job, Kakusui prefers to drape her cloak across her entire body, giving her a more sinister appearance and masking her true gender.

Kakusui is a very self-conscious individual who struggles to be seen as threatening. She works hard to cultivate an image as a mysterious, dangerous person, but generally fails to come off as anything more than pathetic. She is shown to be quite scatterbrained and clumsy, getting lost in her own hideout, failing to whistle properly when calling her minions, and tripping over her own cloak at various points. Despite this, she also takes herself very seriously, and is prone to breaking out into long speeches about how she will avenge her master, only to be ignored by the people she is talking to. This disrespect has caused Kakusui to develop very low self-esteem, which has led her to have a tendency of chastising herself for being useless when frustrated. Nonetheless, she is highly regarded and loyally followed by her subordinates, with several even having crushes on her.

Kakusui is incredibly devoted to her deceased lord Gumo Danjou, who she believed to be the first person she had ever met to truly value her. This loyalty remained firm even after Danjou's death, where she resolved to devote the remainder of her life toward avenging him. The depth of Kakusui's devotion was perhaps best demonstrated during her final encounter with Suzume, where she expressed a complete willingness to end her own life for the sake of defeating the person responsible for killing him. While Danjou recognized Kakusui's talents enough to appoint her as his second-in-command, he did not view her as anything more than a convenient tool for him to manipulate, making her dedication to him tragically one-sided.

Kakusui has sworn to never rest until she has killed both Suzume and Inukai. Despite this, she has no confidence in her ability to do so and makes heavy use of trickery in an attempt to improve her chances. While she considers Suzume to be her fated rival, Suzume doesn't register her as a threat at all and never acts seriously in her presence. Inukai, meanwhile, pities Kakusui somewhat due to believing that she is simply another victim of the cycle of revenge, though he still shows no mercy when pursuing her.

Kakusui is a crafty individual who compensates for her middling skills through unconventional tactics and trickery. While neither her Level Cap or Skill Levels are known, she was considered to be talentless as a ninja by the other members of her clan and was unable to significantly improve her skills even after extensive training, suggesting that she is lacking in natural ability. After joining the Silver Eye Sect, she worked to compensate for her lackluster strength by developing unique fighting techniques to catch her enemies off guard, which drastically increased her effectiveness as a ninja and enabled her to be recognized as the group's second-in-command. Kakusui demonstrated her refined skills throughout her brief turn as leader of the Silver Eye Sect, where she was able to easily disarm Kentou Kanami and provide a formidable fight against the trio of Kanami, Suzume, and Tokugawa Sen with the assistance of the Decaptation Blade and her strongest subordinates. Her power is not comparable to truly gifted ninja, however, as she quickly lost when engaged in single combat with Suzume.

In combat, Kakusui utilizes a unique fighting style of her own invention known as the Crane Wing Blade, in which she holds a hidden blade between her toes to attack her enemies by surprise with. Through this technique, she was able to gain the upper hand in a fight with Suzume when wielding the Decapitation Blade, showing it to be quite effective in one-on-one combat. As a side effect of developing this technique, Kakusui also has incredible grip strength in her toes, allowing her to easily hang from ceilings using them. Kakusui also possesses a unique ninjutsu known as the Freezing Crane in which she fires an expanding barrage of icicles at her opponents to deal considerable damage.

While she is shown to be highly respected by her followers, Kakusui is untalented as a leader and lacks anything in the way of managerial skills. After taking control of the Silver Eye Sect, she very quickly plunged it into severe debt, which she continued to increase as she unsuccessfully tried to stop Suzume, ultimately resulting in her being forced into slavery by Pluepet to pay it off. 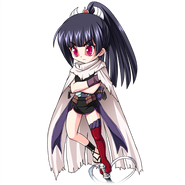 Kakusui's portrait in Three for the Slash! Thrust! Burn! 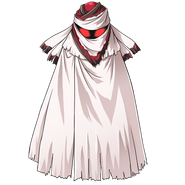 Artwork of Kakusui from the Alicesoft Staff Diary.