The Kaiju Princess is the princess of the Kaiju race. She travels across dimensions by her older brother the Kaiju Prince's side to explore new worlds and assist Monsters in need. The two often appear as a pair of difficult hidden bosses in various Alicesoft games.

The Kaiju Princess and her brother first appeared in Toushin Toshi II on the 30th floor of Ragnard's Dungeon. Both can be encountered randomly like any other ordinary enemy while wandering through the floor. While they possess extremely high health and defense stats, they are much more likely to simply run away during battle rather than actually attack, and as their health does not regenerate between battles, Seed Cashima is able to gradually wear down their health over several battles until they are defeated. The Kaiju Princess is considered to be a Gal Monster, and can be caught by a capture rope when at low health, after which she will fight alongside Seed as the most powerful gal monster in the game. After both Kaiju are defeated, Seed will obtain the ALICE Sword, one of the most powerful weapons in the game.

The Kaiju Princess' second and most notable appearance is in Kichikuou Rance, where she will join Rance alongside her brother if he frees the Holy Gal Monster Housesnurse. She is shown to have a crush on Rance, which he is indifferent to due to her being too young for him.

The duo appear again in Mamatoto alongside their army if the player continuously visits the monster world between chapters and has encountered Gunagan at least once. After defeating the group, the player will be able to battle the Crazy King on subsequent trips to the monster world.

The Kaiju Princess and her brother's most recent appearance to date was in Persiom, where they and their army will randomly appear after the player has advanced over 300 floors in the dungeon. By defeating them, the player can obtain the Reaper's Sword, one of the most powerful stat boosting items in the game.

The Kaiju Princess has the appearance of a petite, purple-haired humanoid girl with pointed ears, large blue eyes and a small but prominent fang in her mouth. As a kaiju, she also has a tail that protrudes from her backside, which is colored green to signify that she is a member of the royal family. She has a love of cosplay, and forces her brother and their army to wear different themed costumes in every game they appear in. She dresses like a pilot in Kichikuou Rance, a knight in Mamatoto, a shrine maiden in Persiom, and a pirate in Alice in Kaeru nyo Land. Notably, however, she always wears a Troy decoration regardless of her outfit.

Spunky and fun-loving, the Kaiju Princess acts much less refined than you'd expect a member of royalty to. She is far more rambunctious and free-spirited than her brother, and often causes trouble for him due to her overly-energetic nature. Despite this, she loves him deeply and refuses to leave his side regardless of how dangerous the situation is. Like the rest of her species, she ends her sentences with the word "gyah".

The Kaiju Princess has a caring heart that possesses a tremendous love for all living things regardless of species. While she dislikes the mistreatment of monsters, she also dislikes having to fight Humans in order to protect them, and wishes that the two could simply peacefully coexist.

As a member of the kaiju royal family, the Kaiju Princess is one of the strongest members of the already powerful kaiju race. While she is substantially weaker than the other members of her family, her power is still far above even the most powerful humans on The Continent, and likely surpasses several Dark Lords.

Like all Kaiju, the Kaiju Princess possesses incredibly tough skin that gives her outstanding resistance against both physical and magical attacks, to the point where most human weaponry is largely ineffective when used against her.

In battle, the Kaiju Princess rides atop a female member of the troy species. Her troy is capable of reaching speeds of up to mach 1, making her ridiculously fast when riding it and granting her great mobility.

In combat, the Kaiju Princess wields the Alice Swords, a pair of legendary blades bearing the face of Alicesoft's mascot Alice-chan. Individually, each sword is comparable to the strongest swords of the worlds she travels through in power, but they are even stronger when wielded in unison. By touching the two blades together, the Kaiju Princess can emit rays of powerful lightning to attack her foes from a distance. In her earliest appearances, the Kiaju Princess only wielded one of the Alice Swords, with her brother possessing the other, but in her more recent appearances she uses both while he wields a similarly powerful gun. Whether this is meant to suggest that she is the stronger swordsman of the two is unknown.

The Kaiju Princess' greatest strength lies in the deep sibling bond she shares with her brother. When the two work together, few things can stand in their way, to the point where their power combined surpasses perhaps even the Hanny King, making them comparable to lower class Gods in sheer strength.

The Kaiju Princess' appearance in the staff corner of DiaboLiQuE.

The Kaiju Princess' sprites in Mamatoto.

The Kaiju Princess' portrait in Persiom.

The Kaiju Princess' sprite in Alice in Kaeru nyo Land.

The Kaiju Princess' portrait in Widenyo.

The Kaiju Princess' sprite in Widenyo. 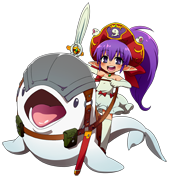 A sketch of the Kaiju Princess in Toushin Toshi II.