An old and absurdly powerful mage who has served his country for decades, Kabachahn is one of the most highly regarded figures in all of Zeth. Both his astounding skill as a magic user and his unshakable loyalty to Zeth have earned him the trust and admiration of his King Ragnarokarc Super Gandhi, who he serves as a loyal right hand to, acting as an enforcer in times of war and as an advisor in times of peace.

As a member of Zeth's four generals, Kabachahn remained one of the most steadfast supporters of King Ragnarokarc Super Gandhi and his egalitarian policies. While other influential figures within Zeth began to turn their backs on King Gandhi, forming their own conservative group in direct opposition to him, Kabachahn, along with the other generals, continued to believe in his ideals in hope that Zeth would one day achieve true equality.

Besides his work as a general, Kabachahn is also a dedicated academic, and acts as an instructor at the most prestigious magical academy in the country whenever he has free time. In addition, his hobby is performing research experiments to discover new applications for the Magic Arts, and his contributions are responsible for several advancements in the field.

During the events of Rance VI, he, along with the rest of the Lightning Army, was sent to prevent the Green Corps, a special division of the non-magic user rights group Ice Flame, from infiltrating Amber Catle, the home of Zeth's Secretary of Education Radon Alphone. Kabachahn cornered the group after they had captured Radon's daughter Emi Alphorne, forcing them to fight him off until their Return Bonsai had recharged enough to allow them to escape. While Kabachahn's devastating lightning magic quickly overwhelmed the group, they were able to narrowly survive long enough to use the Return Bonsai and escape with Emi in tow, causing the old mage to lament holding his power back in the fight.

Kabachahn appeared again later to assist in the mass evacuation of Zeth after the deactivation of the Maginot Line, the nation's primary defense system, and the invasion of the monster army led by the Dark Lord Camilla that followed it. After the evacuation, Kabachahn, alongside fellow general Saias Crown, patrolled the evacuee camp in order to defend it from monster attacks. During this time, he managed to save the Green Corps by obliterating a monster army that had ambushed them with his most powerful spell Raijin Lightning. Immediately after this, a deeply jealous Rance attempted to challenge Kabachahn to a duel to prove that he could have defeated the monsters without the other man's assistance, but was instantly defeated by a powerful bolt of lightning. After Camilla had been successfully defeated and the monster forces successfully eradicated, Kabachahn resumed his regular duties as a general, cheerfully looking forward to the nation's new beginning.

In the non-canon Kichikuou Rance, Kabachahn and his colleagues are tasked with defending Zeth when the kingdom of Leazas, led by the newly crowned King Rance, begins invading it. Kabachahn's Lightning Army will continue to attack Leazas until it is defeated at its base in Amber Castle, after which an exhausted Kabachahn will return to his estate where, after a brief exchange with his Homunculi daughters, he will die peacefully in his sleep.

Kabachahn is a somewhat tall old man with a long white beard and sharp red eyes. He wears a distinct green robe with a long, flat hood bearing a lightning-shaped emblem at its forehead at all times. His clothing is largely identical in Kichikuou Rance, though his hood is more rounded and the lightning-shaped emblem has been split into two different emblems on each side of his forehead. His eyes are also colored purple rather than red. As a young man, Kabachahn had a clean-shaven and handsome face and long hair.

A firm and serious veteran general, Kabachahn is a highly revered figure within Zeth. He is one of the only people in the notoriously segregated nation to have the respect of both the conservative anti-Gandhi members of the nobility and the progressive Gandhi supporters due to his long and dutiful service to the nation. As a result of this, he is often called upon to act as a mediator between the two warring factions, making him vital to the nation's decision making process. While he is entirely subservient to both his King and country, he is far from a pushover, and is unafraid to take charge of a situation when his superiors and colleagues become to caught up in their interpersonal conflicts, with even Gandhi himself respecting his opinions. He is described as thunder personified, being calm and placid in most situations but erupting into bouts of terrifying and commanding power when those around him fall out of control.

He is almost always accompanied by a pair of twin lightning fairies known as Futaba and Moe. While Kabachahn utilizes the duo's natural control over lightning in order to amplify his own power, he is extraordinarily kind to them and treats them like his own children when not fighting. In return, the two fairies love Kabachahn very much and affectionately refer to him as "grampa". In Kichikuou Rance, rather than being lightning fairies, Futaba and Moe are instead a pair of homunculi, artificial humans that were created through Kabachahn's research, making them his actual children instead of his surrogate ones as they are in canon. Additionally, he is in the middle of creating a third homunculi known as Tsubomi in Kichikuou Rance, who he carries with him as a fetus in a container that he periodically breathes into to supply carbon dioxide.

Kabachahn is very close with the other three generals of Zeth, and is looked to by each of them as a mentor and father figure. He serves as the unofficial leader of the four, and is put in charge of having the final say in all of the group's decisions. In particular, he is very close with Uspira Shintou, the general of the Ice Army. Kabachahn is the only person that Uspira is completely comfortable speaking openly with following the death of her husband, and she often seeks out his advice as a trusted confidant. Kabachahn loves Uspira like his own daughter, and constantly wishes that she will be able to one day move on from her past trauma and find a new happiness for herself.

Compared to his relationship with Uspira, Kabachahn's dynamic with Saias Crown, general of the Fire Army, is much less stable. Saias' sharp tongue and fearless disposition result in him frequently challenging Kabachahn's authority with sly remarks, which Kabachahn counters equally with his own cunning witticisms. Despite this, the two share a deep mutual respect for each other, with Kabachahn being one of the few people that Saias carries a genuine amount of admiration for and Kabachahn finding Saias' outspoken desire to see Zeth change to be a source of hope for the nation's future. As a result of this, Kabachahn supports Saias in his efforts to romance Uspira, as he recognizes him as a man worthy of loving her.

Kabachahn also holds a strong bond with Alex Valse, general of the Light Army, and believes that he has the potential to be an amazing leader. He often encourages the young man to be more proactive and assertive with others, and pushes him into marrying princess Magic the Gandhi, showing that he desires him to become the next King of Zeth.

A living legend, Kabachahn is universally recognized as one of the most powerful mages alive. He possesses a high Level Cap of 46, and is currently level 40, making him one of the strongest people living on The Continent. He also has a Magic Lv2 Skill Level, giving him an immense amount of potential in the field. As Kabachahn has dedicated his long life to perfecting his magic, he has achieved the full potential a Lv2 Magic user can possibly reach, to a point where his magic power is comparable to that of a low-level Lv3 mage. Because of this, he far surpasses other similarly talented mages in raw power, with only King Ragnarokarc Super Gandhi himself and the handful of Lv3 mages in the world such as Anise Sawatari beating him out in terms of destructive capability. In addition to this excellent magical ability, Kabachahn is also incredibly sturdy for a mage, and is capable of shrugging off powerful physical attacks with very little effort, making him highly formidably both physically and magically. His power is so great that even the notoriously condescending and dismissive Rance could only react with surprise and awe at the sight of it.

While Kabachahn is highly skilled in all forms of magic, he specializes in lightning magic. By conducting the natural lightning created by his fairies Futaba and Moe, Kabachahn is able to amplify his already incredibly powerful lightning magic to absurdly high levels. Almost no one can stand against his lightning attacks, with even Rance being forced to retreat when faced with them. His most powerful spell is known as Raijin Lightning, the strongest lightning spell in existence which only he is capable of using. When using Raijin Lightning, Kabachahn launches a storm of lightning bolts upon his opponents, allowing him to instantly annihilate massive swarms of enemies at once. Through the use of Raijin Lightning, Kabachahn is capable of easily obliterating an entire army of high level monsters that even the strongest warriors would struggle fighting. Gameplaywise, Kabachahn can cast this spell after charging his magic for only one turn, whereas all other magic users require at least two turns of charging to unleash their most powerful spells, further showcasing his talent as a mage.

Beyond his incredible talents as a mage, Kabachahn is also skilled in magic science, and is a leading figure in the world of magic research. His breakthrough discovery of creating artificial lifeforms known as homunculi was one of the greatest achievements in biological magic in history, and serves as a testament to his skill as a scientist. Kabachahn utilizes both his skills as a mage and as a scientist while working as a teacher, as he is able to act as an instructor at Zeth's military academy as well as a teacher at its most prestigious magic academy. 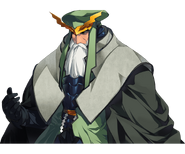 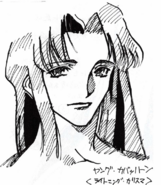