Julia Lindum is a member of the Leazas Royal Guard, formed from the strongest women within the military and dedicated to protecting the Royal Family. Unfortunately, Julia didn't attain the rank of Royal Guard due to her strength but instead because of her family's connections. She is the daughter of Leazas' prestigious Lindum family and her father's influence saw her through to her current position. Julia is actually very weak and her contributions as a fighter amount to practically nothing in each of her appearances. Originally, these failures did not dissuade her from her own opinion of her fighting ability, which in her first appearances she considered quite good. She does her best to strengthen morale with her bright personality though, and she maintains a good friendship with Queen Lia.

She made her first appearance in Rance IV as a member of the Rance Rescue Team that used Maria's aircraft Tulip #4 to travel to the floating continent of Ylapu. She didn't contribute much and was defeated multiple times but she gave her best while maintaining an upbeat attitude. It is also implied that Lia only sent her along with such powerful company as Rick Addison and Leila so that Rance could have a virgin to play around with during his adventure (Julia quickly discovers that she does not enjoy sex. She finds the experience too painful - or at least too painful with Rance). She also appeared in Rance 03 as a tourist guide, traveling all over Leazas with Aten Gnu to show her around. She eventually joins Rance's party during the chaotic war with Helman and the Dark Lords.

At some point she formed a casual friendship with British, due to her curiosity about a man somehow trapped in a concrete wall. She started regularly visiting to provide him company, listen to his stories, and occasionally feed him.

She is confirmed to appear in Rance X as a playable character.

Julia has a short orange hair and is mostly seen in the golden armor of the Royal Guard. Sometimes, she's been seen with some modifications in her armor, wearing a pink skirt above the mails. In Rance X, she wears glasses after being powered up by the Hanny King again.

She is an innocent and childish girl with a cheerful and enthusiastic personality. She's very optimistic and joyful. She seems to be rather fond of food, since she's often seen eating and likes to share meals with British. Despite her enthusiastic attitude, she later develops a low opinion of herself and thinks she's useless. She's not very good at anything in particular and usually fails in what she does, making her a pretty mediocre soldier. She's not really depressed by this most of the time though and has learned to live with it. Strangely enough, despite these deficiencies Julia has an incredible resistance to pain, sometimes being heavily wounded and keeping a cheerful and lively attitude or grabbing her sword by the edge and not showing any signs of pain or even annoyance. She's not very bright and tends to believe in whatever anyone says, no matter how absurd, and she lacks all sorts of common sense (which Rance is often able to make use of).

She's a good friend with Queen Lia, due to working directly under her and being the same age. Lia likes her and allows her to do whatever she feels like for fun, like adding a Flag with Julia's face right under the Leazas Flag in the Leazas Castle.

Julia is very weak in combat for her position. While she has a Sword Combat Lv1 skill and a pretty good cap of 38 giving her decent potential, her current level is only 14 though. She hasn't given much use to them and is usually pretty useless compared to those around her. She didn't get any proper training in the use of the sword either.

In Rance 03 she actually used the sword inversely, grabbing it from the edge and hitting her opponents with the handle. Obviously, it wasn't very useful or powerful but it worked for her.

It should be noted that she managed to help defeat Dens Blau, Hubert Lipton and Toushin Upsilon.

Also worth noting is that the Hanny King seems to have a fascination with her, at one point describing her as a "diamond in the rough." In Rance IV, Kichikuou Rance and Rance X there exists an option to have the Hanny King train her in combat. The end result does not create an overly powerful character, but does makes her much more competent and arguably even useful. In Rance X however, she gains level 2 Sword Combat and Hanny and her level is increased to 82. 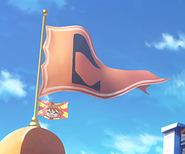 Julia's flag under the Leazas Flag in Rance 03. 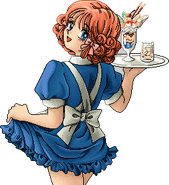 Julia working as a waitress in Rance IV.

Julia, Rick and Shizuka after crashing into Toushin Toshi city. 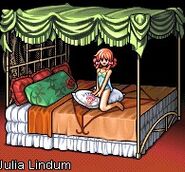 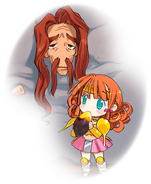 Julia with British in Rance VI.

Julia in her tourist guide attire in Rance 03.

Julia in her Royal Guard armor in Rance 03.

Julia in battle in Rance 03. 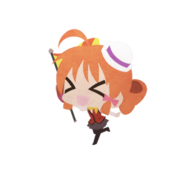