Jericho is a pretty childish girl that works as a prison guard, albeit she's not very good at her job since she tends to fall asleep instantly if she gets too bored. Her first canonical appearance was in Rance 01.

Jericho is a petite girl with short green hair. Despite her appearance she is 14 years old when she first meets Rance, and 20 years old by LP0007.

She reappears in Rance 03, this time as a playable character, but she's mostly considered a joke. It is revealed that she lost her job due to her frequent sleep, so she works at Keith Guild for summer break.

She can be sold to the brothel in Deng in Rance 03. If Rance buys her back she would complain that the adults she met were really "scary".

She's not very strong in combat, having a very low level, and is unskilled with any weapon. She does possess the Unarmed Combat Lv1 Skill though, so she likely has some level of aptitude for martial arts.

Despite her weakness, she has survived fighting against the likes of Thoma and Noce who are far out of her league.

She can acquire a skill from ALICEMANLADY that allows her to make more money after battle.

Jericho's portrait in Rance 01 and Rance 03.

Jericho in combat in Rance 03. 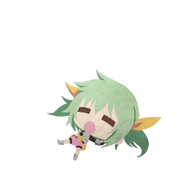 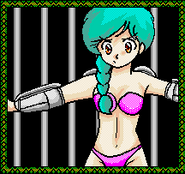 Jericho performing her job in Rance I. 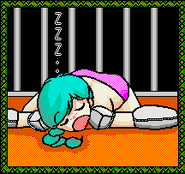