Jean Gangvang II was the son of Duke Gangvang, an influential noble from the Kingdom of Leazas.

A haughty and arrogant nobleman, Jean spent much of his time abusing his father's wealth and status to force others to cater to his every whim. At some point in the past, Jean became fascinated by Yulang Mirage, the champion gladiator of the Leazas Coliseum, a woman renowned for both her great strength and exceptional beauty. Jean approached Yulang multiple times and attempted to convince her to retire from her career as a gladiator to become both his personal bodyguard and his wife, but was routinely rejected by the female warrior, who was only interested in strong men.

Eventually, Yulang told Jean that she would be willing to become his under the condition that he first manage to defeat her in the coliseum, which he agreed to. Rather than develop his skills as a fighter, however, Jean decided to instead climb his way through the ranks of the coliseum by bribing his competitors to throw their fights for him, allowing him to win his matches without exerting any real effort.

By the time of the events of Rance 01, Jean's strategy had allowed him to reach sixth place in the coliseum rankings, eventually leading him to be pitted against the warrior Rance, who had entered the coliseum in the hope of encountering the mysterious ninja that threatened him a few nights prior. While Rance accepted both 800 GOLD and a book containing nude photos and the contact information of Leazas' highest-quality escorts from Jean by promising that he would intentionally lose the fight, he quickly and easily defeated the other man during the match itself. Following his defeat, the outraged Jean confronted Rance, who simply mocked him for trusting a stranger so easily.

Some time later, Jean attempted to have his revenge against Yulang, the woman whose continuous refusal of his advances resulted in him getting publicly humiliated in the coliseum. Hiring two former members of the Endless Tomorrow Gang to assist him, Jean ambushed Yulang in an alley while she was in civilian attire and off her usual guard following her night together with Rance to beat the gladiator into submission and gang rape her. The outcome of Jean's scheme varies depending on whether or not Rance had earlier lent Louis Quitowack, a fellow adventurer of the Keith Guild, 10 GOLD to use in the Leazas Castle Casino. Should Rance have given the money to Louis, the other man manages to intercept and kill the trio before they are able to have their way with Yulang. Alternatively, should Rance have avoided paying Louis, Jean and his thugs will savagely rape Yulang before being found by Rance and Menad Shisei, who then fight and kill them.

Jean was a handsome young man with long blonde hair, fair features and a lean, elegant build. As if to further emphasize his good looks, a cascade of rose petals constantly accompanied Jean wherever he went, seemingly manifesting from thin air. Jean's clothing consisted of a ruffled sleeveless shirt, black opera gloves, black pants, iron grieves and a small pair of earrings.

In contrast to his charming appearance, Jean was a very selfish, cowardly and generally despicable individual. He viewed all of the citizens of Leazas outside of the nobility to be commoners who were unworthy of his empathy, and constantly lorded his family's power over them to force them to do things for him. Because of this, he was very spoiled and completely unused to having anything not go his way, causing him to quickly lose his temper and throw a tantrum when they didn't. This spoiled upbringing also caused Jean to largely be incapable of doing anything by himself, making him flounder when left to his own devices.

Jean took a particular amount of interest in Yulang Mirage, the champion of the Leazas Coliseum, due to her refusal to accept his advances regardless of how much wealth and power he offered to her. Jean desired for Yulang to be his wife and personal bodyguard, believing her strength and fame to both be worthy of being associated with the Gangvang name. Despite this, he did not have any interest in Yulang as a person, and chose to go against her one desire to be with a strong man by attempting to become champion of the coliseum solely through cheating. Jean's lack of any real feelings for Yulang as anything more than a trophy were further shown after his defeat, where he attempted to brutally beat and rape her with the assistance of two hired thugs because she would not willingly submit herself to him. Yulang appeared to generally dislike Jean, finding him to be weak and cowardly, but was genuinely willing to marry him should he have had been able to defeat her in the coliseum, showing that her love for fighting surpassed her personal evaluation of him as a person.

While the full extent of his potential is unknown, Jean was a largely weak person who relied entirely on his father's wealth and power to accomplish anything. Due to his abhorrence of hard work, he put forth no effort in developing his skills as an individual, causing him to lack any notable strengths. In particular, despite his toned physique, he possessed a very weak constitution, getting defeated by Rance in a single attack during their fight in the coliseum, something that even Louis, the lowest-ranking opponent that Rance fought against, was able to sustain.

During his time as a participant in the Leazas Coliseum, Jean wielded a pair of knives in combat, though as he had won all of his matches prior to his one against Rance through bribery, it is unknown if he possessed any genuine talent at using them.

Outside of his physical abilities, Jean was moderately skilled as a persuasive speaker. With the assistance of his considerable wealth and large web of connections, he was able to convince many people to perform unreasonable and humiliating work for him with relative ease. Despite this, as Rance had no problem with going against the deal that he made with him in exchange for money, it is clear that even this was a talent that he owed largely to his family name and not his own abilities. 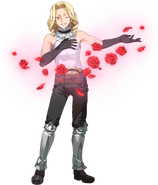 Jean's appearance in Rance 01: Hikari wo Motomete The Animation.