Imagawa Yoshimoto is the "Lord" of the Imagawa House fouded by the Hannies that were living Tokaido. In the past they used to coexist peacefully with humans, however, this wildly changed the day they found the Hanny King passing by, which led all the Hannies to gather and happily celebrate the return of their King. They founded the Imagawa House as part of their "game" to conquer JAPAN by copying the mannerisms of the humans that are warring in the Sengoku Era.

It turns out that this Hanny King is infact a common old man wearing a costume, who the Hannies mistook for the real Hanny King. While Hannies peacefully coexisted with humans, Yoshimoto had a severe phobia for them so when he would leave his house wearing a Hanny costume to avoid being attacked by them. One day however, he wore a costume of the Hanny King, and the Hannies happily greeted him and took him with them, forcing him to found the Imagawa House as their Leader. While he's their Lord, Yoshimoto is completely terrified of them and is more or less forced to do what they want to avoid being detected, so he was stuck in a position as a Lord in the Warring Era. The only way he has to keep them under control is by preparing the Imagawayaki, a unique recipe takoyaki of his own that the Hannies find absolutely delicious.

During the events of Sengoku Rance, his daughter Anko requested Rance to save him. He will then have a meeting with Yoshimoto where he will reveal him the situation he's in, and Rance will agree to help him in exchange of having sex with his daughter. Even though Yoshimoto doesn't agree, Rance one-sidedly decides that "it's a deal" and proceeds to wage war to the Imagawa House. After conquering the territory defeating the Army of Hannies, Rance fakes a battle with Yoshimoto in front of the other Hannies where the "Hanny King" perishes, leading the depressed Hannies to disband the Imagawa House and saving Yoshimoto as a result. After Rance had sex with Anko, he was able to reunite with her and continue living a peaceful life. 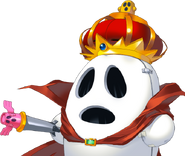 Yoshimoto's disguise of the Hanny King.