She is one of the Four Holy Gal Monsters, Housesnurse The Earth. A small little girl dressed in baggy clothing, she carries a large wooden hammer. Despite her looks, she's around 6000 years old. She still behaves like a young girl though. Her favorite food is Curry Rice, but only sweet, boiled and sliced. She also likes Hamburgers and Cream-filled Desserts.

As one of the Four Holy Gal Monsters, she's a low class Goddess with an amazing ability. She has control over Earth, being able to bend ground and pieces of earth at will and can even create pathways through desert.

She was captured by the first king of Shangri-La (who wasn't king at that time yet) to establish the country and control secrete passages through the desert. She's still kept in a secret dungeon in the Royal Palace of Shangri-La to this day, where her powers are drained and used against her will via enchantments to control the passages of the Desert. Because she's been trapped for centuries, she hates humans but she has no choice but to obey them due to her circumstances. Since her body is too small, Luce Descoco only had Intercrural sex with her.

In Kichikuou Rance, her fate represents a crucial part in the gameplay. After Rance defeats Descoco, the player is given the option whether to let her free or not. Releasing her will make the player lose the advantage of using Shangri-La's geographical position to easily attack Helman or Zeth, forcing the player to attack through the mountains and through Adam's Fort, making the game much harder as a result.

While her role is unknown, she is confirmed to appear in Rance X, along with the other 4 holy Gal monsters. 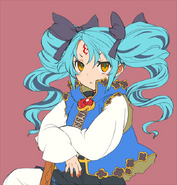 Add a photo to this gallery
Retrieved from "https://alicesoft.fandom.com/wiki/Housesnurse?oldid=107002"
Community content is available under CC-BY-SA unless otherwise noted.