AliceSoftWiki
Register
Don't have an account?
Sign In
Advertisement
in: Articles with Major Spoilers, Articles needing a Quote, Characters,
and 6 more

Houjou Souun is a name passed down through the generations for the leader of the Houjou House. The remainder of this article describes the Houjou Souun during Dark Lord Xavier's last revival in the year LP0005.

Houjou Souun is the leader of the Houjou House, and currently the strongest human Diviner in all of JAPAN. Of the major leaders of the country, he is one of the most dedicated to solving its issues and saving it from global threats, and worked diligently with other Houses such as the Uesugi House, the Tenshi Sect and the Miko Institute to do so.

Though he was swamped with work and could spent little time with her, he has long had a close relationship with Nanjou Ran, a talented diviner. Despite some of their troubles, this culminated in a marriage proposal which Ran gladly accepted.

During the war with Oda, Ran tried as much as she could to help ease the weight on Souun's soldiers but was frustrated with her inferior power when compared to Souun. However when she became much more effective as she discovered her ability to unleash the fearsome firebird Suzaku, Souun warned her never to use it again as he was wary of the creature, and indeed soon discovered that it was an apostle of the Dark Lord Xavier.

Though Ran agreed to never use it, she was soon after captured by Oda, leaving Souun emotionally broken. When he was called to Mamushi Oil Field to defeat a powerful ogre, he ended up trapping himself with the monster to save his fellow diviners and stop the creatures.

He was eventually saved by Ran and Rance, who had been convinced to help look for him after the defeat of his House, but just as the ogres were defeated, Ran was killed in front of him by the emerging Suzaku. Souun then joined forces with Oda in the hopes of avenging Ran and saving JAPAN.

After the end of the war, though no longer leader of the Houjou region, he remained a leader of the diviners and continues diligently working for JAPAN.

He and Nanjou Ran are in love with each other, but Souun's dedication to his work often gets in the way. He holds great hatred to Suzaku for Ran's death.

He later goes to the Continent to search for Suzaku, who he believes is still alive. He is proven to be correct, as it is revealed Suzaku can revive from death unless they are killed by a god.

Souun is a tall thin man with dark blond hair, and wearing a slightly more elaborate version of the diviner robes. He is also fairly notable for being one of the few men of the series wearing glasses.

Souun is a very kind but serious individual, who always strives to deal with his numerous duties to the utmost of his ability, which is considerable. As head of the diviners, he is constantly coordinating with other diviners, the Miko Institute leader Natori and head of the Tenshi Sect Seigan, for the good of JAPAN. As leader of the House he tried to protect the Kanton region from Takeda with the help of Kenshin, and as one of JAPAN's most powerful diviners he often has to fight himself some of the most dangerous Onis roaming JAPAN. As such, he is almost constantly working and has time for little else. When Houjou was conquered by Oda, he wanted to educate Rance on the foundation of JAPAN, Orochi, but Rance cared little.

The one case in which he tries to make some time and often fails, is for his girlfriend Nanjou Ran, with which he is very close to. Still, their relationship is often complicated by Souun's responsibilities making him miss numerous rendez-vous.

He is still inexperienced about sex, and is therefore pretty shy over the whole subject. His relationship with Rance is an interesting one, as though Rance frequently mocks his virginity, he seems to have no problem spending time with him casually, which is quite unusual for a man.

Souun is the most powerful of active human diviners in the world, as he is easily the strongest of his house, and his power is said to rival even his ancestor and house founder, the first Houjou Souun. With his high cap of 53 and a Lv2 Yin Yang skill, he has tremendous potential, and his constant training has already brought him at level 50. As he is also quite well learned, he has much knowledge of the working of Onis, apostles and most JAPAN magical phenomanae.

His talent and great dedication to his duties has made him an expert in taking down all sorts of monsters and Onis, and he has started creating his own powerful spells. One of his most often used shikigami are powerful female warriors (six at maximum) that can face even some of the stronger Onis or compete with an apostle.

In order to recruit Houjou Souun, the following actions must be completed: 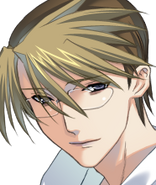 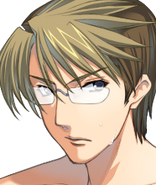 Souun While Taking a Bath 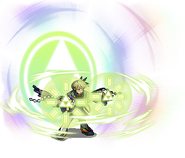