Hotta Daigo is a student at Makoto Academy in the Katsukashi ward of the district of Toukyou. His school falls under Sensouji Academy, which controls the Toukyou district under PGG rule. Daigo is an acquintance of Sensouji Academy banchou Kongomaru Sanzo and Sensouji's executive director Kongomaru Aya. Daigo also has a crush on Aya, but she does not reciprocate his feelings.

During the events of Big Bang Age, Zanma Rouga forms Wolf Fang and takes over Seijou Academy in order to attempt to unify Japan. Following this, Daigo proceeds to fight Wolf Fang as part of Sensouji. After he has been captured he refuses to join Wolf Fang, unless Aya convinces him.

During the National Chapter, Daigo repeatedly tries to woo Aya, but is rebuffed by her every time. However, after Daigo saves several people from a burning building, Aya gains respect for him and offers Daigo a dinner with her and her family.

After Daigo has been stationed in the Ice cave in Sapporo, he trips and falls off a cliff, causing his left leg and right arm to break. After a while, an expedition is sent out to the Ice cave and Daigo is discovered there. Mysteriously, upon examination, Daigo is found to have no injuries at all, despite Daigo's memories of the event. Some time after, Daigo is reborn as Devil Daigo and gains new power. Despite Daigo's expectations that Aya will be into him now, she continues rejecting his advances. However, after seeing through Aya's clothes with his new x-ray vision, Daigo is satisfied.

Daigo has vibrant, somewhat spiky, red hair and red and yellow eyes. Daigo wears a bright cyan-colored jersey with the letter G embroidered on the front.

After transforming into a devil, Daigo's color scheme changes. His cyan jersey becomes blueish-green, his skintone pale green, and his hair brown. His eyes get a red vertical streak over them, resembling a scar. He can also grow red wings at will.

In his human form, Daigo is a short range melee fighter. He attacks using the power of Jeet Kune Do, a martial art. This consists of getting close to his opponent, punching them with his right and left fists, then ending in a backflip kick. His unique ability, 'Prevail', gives Daigo a 50% boost in ATK and HIT if his HP runs low.

When Daigo transforms into his devil form he becomes a medium range fighter. He approaches his opponent, then quickly closes the distance and throws two punches, both of which shoot out a purple energy blast. He ends his combo with a backward kick, which also shoots an energy blast. His special attack becomes 'Daigo Beam': Daigo jumps, sprouts wings, then fires a purple laser from his eyes that leaves a trail of fire. The attack hits before the oppnonent may move, but only has a 50% hit rate.

Daigo is also able to use x-ray vision, which he calls Daigo Eye. He used it once on Aya to see through her clothes after she called his new form 'disgusting'. 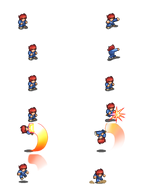 The sprites used for Daigo's Devil Beam in BBA.