The Horus (ホルス, horusu) are a race of extraterrestrial lifeforms that inhabit the same universe as Ludo-Rathowm’s Continent.

Hailing from a distant planet referred to as the “mother star”, which has become a desolate uninhabitable wasteland due to the species’ high energy use, the horus travel through space in search of planets to colonize. Horus colonies are generally made up of around 10,000 individuals and are led by a queen. These colonies are countless in number and, while required to maintain contact with each other, are otherwise entirely independent and divergent in their customs. Upon landing on an inhabitable planet, a horus colony will swiftly attempt to conquer it through military force, enslaving any other intelligent life living on it in the process. Horus colonies require enormous amounts of energy to continue functioning, causing them to deplete conquered planets of all of their resources over the course of a few years. While incredibly advanced and far-reaching, the horus are a terribly destructive and wasteful species that almost always bring ruin to wherever they go.

Horus resemble humanoid insects in appearance. They are roughly identical to Humans in terms of size and build but are substantially lighter, with a healthy male weighing as little as 25kg. Horus bodies are covered by a thick exoskeleton which provides them with a natural armor that frees them of the need to wear any sort of protective clothing. The exoskeletons of male horus are light green in color, while those of females are light red. Horus queens possess a unique white-colored exoskeleton that visually indicates both their rank and pedigree. Perhaps most notably, horus possess a set of fin-like wings along their shoulders that allow them the ability to fly at great speeds up to 100 meters into the air. Overall, the horus are a naturally agile and flexible race.

Horus are born from crystalline eggs laid in vast quantities, giving the species a very high reproductive rate. Their lifespans are also quite long, with individuals being capable of living for over a hundred years when placed into favorable environmental conditions. Despite this, most horus live relatively short lives due to their tendency to quickly deplete their homes of their resources to a point where they become uninhabitable. Certain subsections of the species, known as “the exhaustive ones”, make efforts to conserve energy as much as possible, allowing them to take better advantage of their extended lifespans. While the exact number of horus in the universe is unknown, it is speculated to easily be within the billions.

An extremely scientifically advanced race, the horus possess technology on a much higher scale than anything found on the Continent. These devices include spaceships capable of intergalactic travel that can comfortably house an entire horus colony, cryogenic freezing chambers that allow members of the species to enter an extended period of stasis during lengthy travels through outer space, and universal translators that enable communication with all forms of intelligent life regardless of their language. In addition, the horus’ primary source of sustenance is an artificially synthesized food known as nectar, which is extremely high in nutrients and can be engineered to perfectly mimic the taste of any other foodstuff. While all horus are capable of operating this technology, only trained engineers are able to construct and repair it, making them heavily depended on by the rest of their race. Despite their impressive technology, horus warriors are trained in comparatively mundane forms of combat, utilizing a combination of spears and their natural speed to overcome opponents.

A rare mutation exists within horus genetics that occurs in about one in a million individuals every 1,000 years. Subjects of this mutation, nicknamed “death horus”, become significantly larger than average, gain an additional, much bigger set of eyes above their ordinary ones, and develop three-pronged claws in the place of their hands. Death horus are several times stronger than ordinary members of their race and are comparable to Dark Lords in terms of sheer physical power. Along with their substantial physical differences, death horus’ minds are filled with an overwhelming killing intent that pushes them to ruthlessly slaughter other members of their species, making them highly dangerous. As death horus only begin to develop their distinct characteristics in adulthood, they are extremely difficult to locate before they become a threat and are generally only discovered after they have already begun killing their own kind. While the reasons for this mutation are unknown, both horus scientists and the Holy Gal Monster Bezeleye speculate that it exists as a means to control population levels.

Horus on the Continent[]

At some point early on in the AV Era, the horus colony vessel F-3Q45 crash-landed into the deadly tundras of Siberia in the northernmost stretches of the Continent. Upon crashing, the horus were attacked by the Monster forces of Demon King Avel, who had become intrigued by the strange race. Due to the overwhelming power difference between the monsters and the horus, almost all of the horus colony was wiped out in this attack, leaving only the 1,000 horus still frozen in their cryogenic chambers inside of the ship and Meglass, an outstanding horus engineer whose resilience amused Avel enough to transform him into a Dark Lord as a practical joke, as survivors. With Meglass restricted to follow the will of the Demon King, the surviving horus remained in stasis for over 4,000 years completely undisturbed.

In the year LP0007, the crashed horus ship was entered by the human warrior Rance and his companions, who were in search of the Holy Gal Monster Serachrolas. After a strange series of events involving Rance and his allies freeing three horus guardsmen from their cryogenic sleep, getting frozen in a cryogenic chamber themselves for five months and defeating the death horus Jhahlckas, who was being kept aboard the ship as a prisoner, the surviving members of the colony, including its queen Terra Horus, were released from their stasis. As a show of thanks to Rance for freeing them, the horus agreed to cooperate in fighting against the Monster Army during the 2nd Dark Lord War that had erupted during the time while Rance and his companions were inside of the ship.

During the war, the surviving horus struggled to repair their ship’s communication device, which had broken during the crash. They eventually succeeded in repairing the machine and carried out a distress call to another horus colony, which offered to assist them in conquering the planet. Before the colony's coordinates could be given, the communication was prematurely cut off by Terra, who had grown enamored with human culture and resolved to instead attempt to coexist alongside the people of the Continent. 15 years following the end of the war, the horus of colony F-3Q45 and their descendants have effectively integrated themselves as a human subspecies on the Continent, and live happily among the other races throughout it.

In the non-canonical Kichikuou Rance, the horus of the Continent mostly share their origins with the ones shown in canon, having crash-landed onto the world thousands of years in the past. Unlike their canonical portrayal, however, the surviving horus were not kept in stasis and instead steadily devolved into tribalism, losing all of their species' knowledge over time. Rather than be separated from his race, Meglass commands a group of horus warriors and is instead lonely due to having no way of communicating with the savage remnants of his original race.

The player is able to explore the crashed spaceship after conquering the neighboring nation of Helman, wherein they can battle several groups of horus warriors as well as acquire two capsule Kaiju, strange monsters that can be stored in small capsules presumably created by the horus, that assist their user in combat. 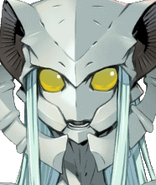 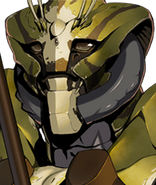 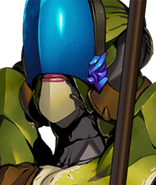 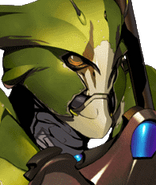 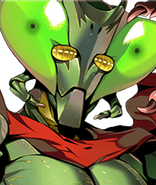 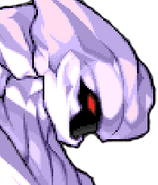 A group of horus guards in Kichikuou Rance. 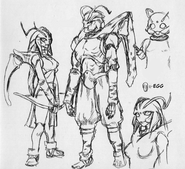