Hiroshi Hyoe is one of the three optional mercenaries that can be recruited in the Sengoku Rance spin-off game Three for the Slash! Thrust! Burn!. He is a ronin of moderate ability and the most expensive of the three, costing 1,000 GOLD to hire. Once hired, he will remain in the party until he is killed in battle.

Hyoe is a middle-aged man in simple robes with dark hair styled into a top knot. He is virtually identical to all enemies of the "Samurai" type encountered in the game, but sports a unique X-shaped scar on his forehead to help make him stand out.

He is described by his profile as being a "Verbose Bodyguard", suggesting that he is talkative and somewhat pretentious. He is shown to be rather old fashioned and chauvinistic, making a point of saying that he will do all the work for the party so the women won't have to. His poor view of women is further suggested by his profile, which mentions that he is divorced from his wife, meaning that they likely have a poor relationship.

Advertised by his profile as being "Fairly skilled!", Hyoe is a swordsman of decent, but unremarkable ability. He is the only one of the three mercenaries who is strong enough to keep up with his three employers, but will still always trail behind them statistically. His usefulness is further compromised by his inability to change his equipment, meaning he has to rely on stat-boosting items in order to remain effective. Despite this, as he is the only mercenary who has any real use in battle, he is somewhat valuable as an ally.

In combat, Hyoe wields a katana. His skill repertoire is basic, consisting of a wide variety of different sword slashes, but it makes up for its lack of flashiness with versatility, allowing him to attack a group of enemies at once or deal a large amount of damage to a single enemy depending on what the situation requires. His most powerful skill is known as the "Huge Rage Slash", which has a small chance of instantly killing the foe he attacks with it. 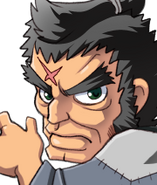 Hyoe's portrait in Three for the Slash! Thrust! Burn! 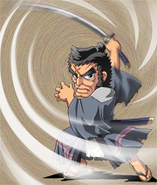 Hyoe's battle portrait in Three for the Slash! Thrust! Burn!