Hibachi is an artificial life form known as Nuhe. The Akashi House had used her for battles during the past but she was later sealed and hidden in Akashi Laboratory.

During the fighting events of capturing Akashi House in Sengoku Rance, her master Akashi Kazemaru refused to let her die fighting for him and set her free in the wilderness. After the Akashi House was captured, a search party found Hibachi and captured her without any resistance.

In the later events after Kazemaru was recruited, she was given back to Kazemaru, who confirmed his feelings for her and requested Hibachi to be his sub-captain which was allowed.

Nuhe are artificial organisms created through an extremely complex and meticulous method. They are no mere tools or dolls, but really close to humans in anatomy with blood and organs, yet they are way more sturdy and durable. They are not built often though due to the absurdly high cost and work necessary to construct a Nuhe. Hibachi's model was different to the other Nuhe from the Akashi House, boasting a short red hair, different tattoos patterns and wielding chains for combat.

Nuhe's minds are usually stunted and very binary, incapable of developing feelings or emotions too much and are completely devoted to their masters, following every order they are given with no hesitation. As a result, Hibachi herself is a very submissive and obedient girl. She's extremely calm and shows little emotion. While it's very rare, she sometimes can get a little mad, but she doesn't make it apparent. She is completely loyal, servile and very protective, specially with Kazemaru.

Usually, fighting is a Nuhe's primal and standard priority. Hibachi was given a contradictory order by Kazemaru to "live and don't fight", which she found trouble understanding. During the events of the Akashi House, she started developing feelings for Kazemaru despite her status as a war machine, but had difficulty with comprehending her own emotions and simply accepted that she wanted to be with her master.

After she re-encountered with Kazemaru, she offered herself to fight under his unit, claiming that she wanted to protect and fight with him in the battlefield. She's very attached to Kazemaru and loves him dearly, which is a mutual feeling. Hibachi has even been shown being really jealous over Kazemaru. In one event in Sengoku Rance, Kazemaru eats food prepared by Kouhime, which was actually awful due to Kou not being the greatest cook, but Hibachi remained silent watching from afar and gave Kazemaru her own food right after and insistently asking him if it was better than Kou's.

Nuhe's combat potential in the battlefield is completely terrifying, boasting a stunning agility and inhuman strength. They are reckless and jump to the frontlines with no concern for their personal safety. They lack the emotion of pain, so even if they are stabbed or mutilated, they won't bat an eye and charge against their opponents.

Hibachi's fighting style changed after being given the order of "not dying" by Kazemaru, who was horrified by the suicidal way of fighting Nuhe's employ. As a result, she stays more in the side-lines and is less aggressive than the regular Nuhe. She mostly fights with her chains, using them as ranged weapons to attack her opponents from afar. She has shown great proficiency with them and has been capable of neutralizing extremely fast opponents like Nogiku.

As a Nuhe, her strength and physical aptitudes are way above a regular human's, but she doesn't have skill levels or levels so it's unknown if she can get any stronger than she is. 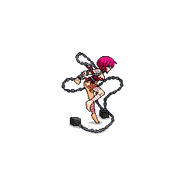