Heidi is a dutiful maid that currently works on Rance Castle. Despite not having a Maid skill, she does her job proficiently and decently enough to work, and she's dedicated enough for it. However, she has a weird personality pathology. She becomes a complete kleptomaniac with bread. If she sees bread she has the urge to steal it no matter what, which has led her to be kicked out from previous jobs in the past.

She has a short blue hair and a pretty serious expression. She sees Rance as a pretty troublesome and tiring person.

She's on good terms with Krutche Muffin, who she sometimes gives bread to while the maid covers her when Sanakia is chasing her in exchange. 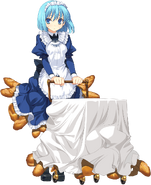 Heidi in the original Rance I. 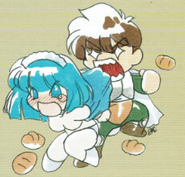