Hazuki Mizuhara is the primary heroine in Toushin Toshi II and the playable heroine of Toushin Toshi II - Soshite sorekara. Daughter of Instructor Mizuhara, she is the heiress of the Mizuhara Dojo. While extremely talented in the martial arts, her father insisted on a male heir and, discouraged by Hazuki's love for the dojo's least talented student, Seed Cashima, proposed a dangerous challenge, and left his daughter out of the loop to the specifics. Hazuki would go to the infamous Toushin Tournament as the partner of the dojo's star student, Billnas. Should Billnas win the tournament, Hazuki would be forced to marry him. Meanwhile, Seed would be instructed to take up the tournament on his own or forfeit any right to marry his beloved.

Hazuki initially believed the ruse, and was inspired to see Seed entering the tournament "of his own free will." Wanting to keep pace, she began to enter the Ragnard Dungeon to practice her own skills, but found herself shocked by the reality of lethal combat once her opponents caught up to her level of ability. A battle with a Caterpillar DX that refused to die left her shaken, but Seed was able to reassure her, and her efforts redoubled after Billnas explained the true nature of the instructor's bargain with the two men. Hazuki continued adventuring in the dungeon, even after passing on her birthright, the powerful Mizuhara Wind Sword, to her beloved Seed. Seed ultimately defeated Billnas to win the tournament, and he and Hazuki vowed to marry.

After the tournament, Seed was kidnapped by Apros, mayor of Toushin City, into her plan to rescue Dellas Gaeta. Unaware of these facts, Hazuki entered the tournament herself the next year in hopes of finding Seed, and defeated Border Galois in the finals. Apros, unable to turn Hazuki into an Angel Eater, attempted to use Hazuki as a means of securing Seed's loyalty, but Serena Phraze was able to rescue the pair, who escaped into the Ragnard Dungeon. There, Hazuki ransomed Seed's life for her own from the Oni King, and gave Seed the Mizuhara Heaven Sword (presumably retrieved from Billnas at some point after the first tournament) and the two were able to return to the city to defeat Apros and Dellas, at which point the pair returned to the the dojo, and on to further adventures.

While one of the most talented members of the Mizuhara Dojo, Hazuki was born into her ability, and did not have to work very hard for her initial success. It was only after her time in the Ragnard Dungeon and the Toushin Tournament that she developed a sense of martial discipline. Hazuki's personality reflects this development, a core of optimism and casual interpersonal relationships that only become stern as the situation demands. Hazuki also shows a certain playful disregard for the rules, possibly the result of her relationship with her father.

Hazuki wears alternate outfits depending on the situation: a green dress and ponytail for city life and a set of purple and white armor for combat situations. During the tournament, she later adopted a brown dress and glasses as a "disguise" to get away from Billnas.

Hazuki is a powerful and well-trained warrior. As one of the only surviving Toushin created by the Toushin Tournament, and with the other survivor, Seed's, level reverted to 4, Hazuki may in fact be the single strongest human being in the entire Toushin Toshi II setting. Despite this prestigious potential title, Hazuki has no flashy techniques, having surrendered the Mizuhara Wind Sword to her fiancé. She does, however, possess some potential for recovery magic.

While she would not like to admit it, her aptitude for disguise is not very good. 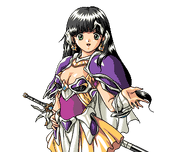 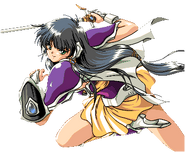 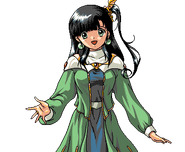 Hazuki's portrait in the Nyo Series. 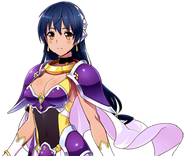 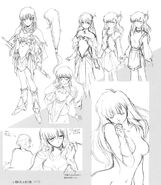 Hazuki's appearance in the Tournament of the Gods: Title Match OVA series.

Mamanyonyo Hazuki's appearance in the Harem Master Trading Card Game.
Add a photo to this gallery
Retrieved from "https://alicesoft.fandom.com/wiki/Hazuki_Mizuhara?oldid=118494"
Community content is available under CC-BY-SA unless otherwise noted.