The personal pet of the Queen of Leazas, Lia Parapara Leazas. She carries him around everywhere, even to bed.

He looks like a small and adorable stuffed animal but he is actually a Thunder Dragon. At some point, he was cursed to his current weakened form. Since he's a dragon, he's at least 4195 years old.

Despite his weakened state, he still retains a small portion of his power and can employ thunder magic to attack his enemies. He's actually quite protective around Lia, and she usually wields him to defend herself from weak enemies.

Harumaki in Rance 03 in the skill asset. 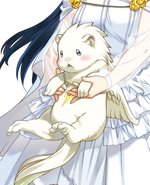 Lia and Harumaki in the Harem Master Trading Card Game. 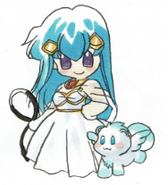 Harumaki and Lia from the Alice's Cottage 4/5/6 Guide.
Add a photo to this gallery
Retrieved from "https://alicesoft.fandom.com/wiki/Harumaki?oldid=109727"
Community content is available under CC-BY-SA unless otherwise noted.