The Hanny King is the king and father of the Haniwa race. He is universally loved by all Hannies and has his own religion called the Haniwa Temple, which almost all the members of the race are part of. He also has a dedicated fan club formed by many Haniko, which is expected from the Hanny King. He looks like a regular Hanny but is white and wears a crown and a red cape, portraying his status as the King.

Despite his weird appearance, he's mostly a noble and wise individual. He isn't naturally hostile to humans unless he has reason to be and has also shown being quite fond of some females like Julia Lindum and Rizna Lanfbit. However, like other members of the race, he still carries some weird personality quirks like his love for silly and clumsy girls wearing glasses, which he likes the most for some reason. He also has a solid friendship with KD.

His powers are unmatched by almost anyone in the world. He's considered a legend for his advanced magical power and very few can match this unique being in combat. There is only one Hanny King and he's eternal, existing since the beginning of the Haniwa race and prevailing to the current era. His magic ability is incredibly obscene, borderline with that of a God, being able to cure supposedly incurable diseases or empower individuals. He can even grant the unique Total Magical Immunity inherent of the Haniwa race to any mortal like humans. 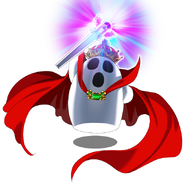 The Hanny King in the Rance 03 remake.

The Hanny King in Persiom.

The Hanny King in Rance X.